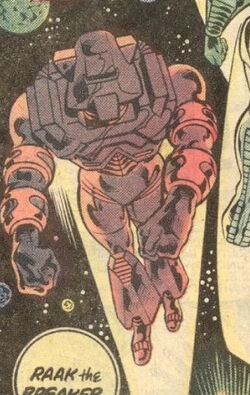 Raak the Breaker was always something of a rogue. He was also one of the most powerful Spaceknights, which made for a dangerous combination. Breaker was among the first Spaceknights to set foot on Wraithworld and helped rescue Rom from it.[1]

After the Spaceknights separated to pursue the Dire Wraiths across the cosmos, he followed a group of Wraiths to Clavius, an inhabited planet. The Wraiths had nearly defeated the Clavians, but Breaker dominated them Wraiths upon his arrival, forming an alliance with them. He then helped them subjugate the Clavians, but Trapper arrived and led the Clavians against the Wraiths. It was during this period that Rom and some other Spaceknights arrived. They quickly joined forces with the Clavians against the Wraiths. After Unam the Unseen sacrificed himself to save Rom in his combat with Breaker, Rom neutralized and banished Breaker and his Wraith allies to Limbo.[2]

Like this? Let us know!
Retrieved from "https://marvel.fandom.com/wiki/Raak_(Earth-616)?oldid=6140922"
Community content is available under CC-BY-SA unless otherwise noted.