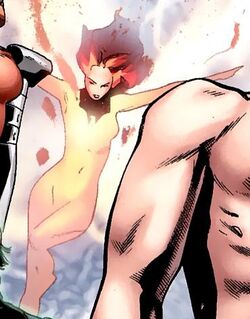 The "woman" known as Revenant is a complete mystery. Nothing is known for sure about Revenant's life prior to Fortress X or her arrival there. Her body is not actually made of flesh and blood, but instead she is a field of patterned plasma.[3]

Some believed her to be Jean Grey because of her red hair, Phoenix shaped energy halo, and her telekinetic and pyrokinetic powers. However, it was assumed that Jean Grey died after the Albany explosion and/or during the subsequent USAF bombing strikes.[4]

Once in Fortress X, Magneto assigned Revenant to be a Force Warrior. She helped the other Force Warriors to daily repair the telekinetic force wall around Fortress X.[5]

Revenant followed Legion's lead when the Force Warriors attempted a take over of Fortress X.[6]

After the final battle with the Human Coalition troops, and when Legion returned reality to normal, Revenant was one of the anomalies which persisted in the mainstream reality (like Chamber's appearance returning to that of his days with Generation X).[7]

On Utopia she told Scott Summers that she was actually a mental manifestation of Rachel Summers, who was still in deep space, before vanishing.[1]

Revenant is a mutant with strong and varying powers including:

Like this? Let us know!
Retrieved from "https://marvel.fandom.com/wiki/Rachel_Summers_(Earth-11326)?oldid=5817770"
Community content is available under CC-BY-SA unless otherwise noted.