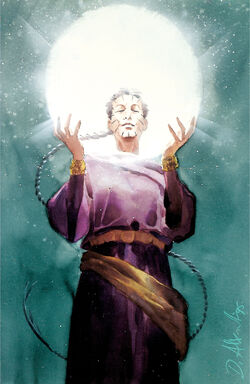 Thanks for today, please for tomorrow

Mother Askani was an alternate version of Rachel Summers whose history began when Rachel sacrificed herself to save her teammate, Captain Britain, who had been lost in the timestream. Rachel did not gain alternate reality versions of herself, but actually split into separate beings in time. Only two have currently been accounted for. One Rachel was sent to the end of time and held prisoner by Gaunt, a man who had been imprisoned there for his crimes. The other Rachel became stranded the late 37th century, 100 years after Apocalypse conquered the world.[citation needed]

After many adventures with Excalibur, Rachel finally managed to return to the future she had come from. While she could not change her past, Phoenix and her teammates were able to change the directives of all the Sentinels of the era to preserve all life, thereby ending the genocide that had prevailed for years. On the return journey, Captain Britain was lost in the timestream and it was discovered that Rachel had to exchange places with him for him to return. Phoenix sacrificed herself to exile in the timestream, to save her teammate. There Rachel diverged into two timelines. One Rachel was sent to the end of time and held prisoner by Gaunt, a man who had been imprisoned there for his crimes. The other Rachel became stranded the late 37th century, 100 years after Apocalypse conquered the world.[citation needed]

37th century Rachel found herself in a desert, attacked by Scarab Flyers. After defeating them, Rachel soon met young Blaquesmith, who called her the "Bright Lady", and sensed his psychic potential, but denied his request to become her disciple. Rachel soon learned that humans and whoever else resistant to Apocalypse's rule could be killed at any moment and the only opposition was a quiet hope and belief in the Twelve, by the Order of the Witnesses. The Order of the Witnesses, founded in the late 21st century, by a mutant seeking redemption, believed Rachel was the "Lost Child of the Twelve", descended from mutants who fought Apocalypse in modern-day, and sent the aged Diogenes Chang and Squy'rr to observe her. Rachel, as "Alyr'n Summerset", attended Apocalypse's Festival of Resurrection, where she encountered his prelates, Ch'Vayre and Luminesca, and battled high councilor Diamanda Nero, while attempting to kill Apocalypse.[citation needed]

Over the next year, Rachel gathered followers, under the name Clan Askani, meaning "family of outsiders". The Askani developed tenets, such as "what is, is", that fate must be embraced, and "thanks for today, please for tomorrow", a belief that the past brings hope, and preached that the "Sacred Timeline" should be preserved and nurtured through careful time travel. Rachel accepted anyone as Akani; via discipline and training, some achieved psychic power, enabling such Askani practices as mediation performed while levitation upside down. Rachel's earliest recruits included Malachi Hark, who would become the first Askani priest; Qua, an Atlantean elemental; Lexii, last survivor of a Clone Sisterhood; and the Gibson-Sterling Mark Nine Warbot Ozana. After shutting-down the powerplant, Hellhole, in Crestcoast, Ozana was damaged and the Askani recruited Blaquesmith, who was a slave there, to fix the bot. Nero ambushed the group near the Scavenger Colony, releasing the humanoid virus Plague against both the Askani and prelates Ch'Vayre and Luminesca. Qua and Luminesca died, but as Rachel destroyed Plague, she had a vision that she would "protect the child born on the day of spring" and died. Shortly after, Rachel was reborn in a Phoenix firebird. Nero captured Diogenes and Squy'rr, torturing them for information and then wiping-out the Order of the Witnesses. The Askani pursued Nero to the Order of the Witnesses headquarters, in the ruins of the Savage Land, but Squy'rr was killed and Rachel was forced to release the Phoenix Force, after Nero nearly killed her. The total power of the Phoenix Force began to control Nero and she begged Rachel to release it from her. Rachel released the Force into the cosmos and depowered Nero, then left Nero with rations and survival gear. Due to either losing the Phoenix Force or becoming old in age, Rachel no longer hid her Hound markings on her face.[citation needed]

The Askani rescued several children protected by the Order, including the young Sanctity, another time-traveling telepath originally from the modern ear. Rachel later followed Sanctity back to the modern era's past, where Sanctity hoped to change the future, knowing her father, Dr. Bolivar Trask, would invent the mutant-hunting Sentinels, Rachel stopped her from interacting with Bolivar, while successfully prevented Larry Trask from witnessing the psychic duel that ensued, but Sanctity secretly planted information about the Twelve in the Sentinels' Master Mold computer. Rachel left the Askani for a time, but later returned, taking the name Mother Askani.[citation needed]

Over the next several years, believers deified the ancient X-Men: "the Xavier" became a father figure, the Bright Lady a mother goddess, and the prophesied "Dayspring" or "Askani'son" their messiah. The Askani also believed in tiny winged Wysps that carried prayers and feared the monstrous Daegon, that hunted the weak in the Apocalypse's name. The Askani developed a ceremonial language, unique martial arts and the Psimitar, a weapon that focuses psionic energy. The Askani took, as their symbols, the Phoenix and the scarred eye, reminiscent of the scars around the Askani'son's right eye.[citation needed]

Now over 100 years old, Mother Askani decided to fulfill the Askani'son prophecy; she and the synthcon Boak sent a Sister Askani, who sacrificed her physical body to become energy and tasked with preservation of the Askani'son, to the past. Sister Askani arrived just as Apocalypse infected the infant Nathan Summers with a Techno-Organic Virus. Scott Summers reluctantly allowed Sister Askani to take Nathan forward to her time, to cure the virus.[3] Upon baby Nathan's arrival, he was given to Mother Askani. Mother Askani placed Nathan in an incubation crib to preserve his life, but the virus had progressed too far. The technicians who examined Nathan called for the Mother Askani and informed her that the only thing keeping the child alive were the acts of Ship, who had created a protective electro-magnetic field and merged with Nathan's electrical parts. Fearing that Nathan would not survive the virus, Mother Askani had him cloned. Mother Askani and Boak gave a second Sister Askani information about various time-traveling threats and sent her to a later point in the modern era, to keep vigilance over Cyclops and Jean Grey. Despite their original assessments, the Askani learned that the original child would live after all. Just then, the Canaanites attacked the base and Mother Askani ordered Boak to remove the children. Boak was only able to remove Nathan, when the Canaanites blasted their way into the room and seemingly killed the Mother Askani and killed Throeblood, as they began the massacre of the Clan Askani.[citation needed]

Badly wounded, Mother Askani brought Scott and Jean's newly married souls, years after Nathan had been sent into the future, into the future to raise Nathan. Since their original bodies would not survive the time jump, Mother Askani placed their minds in bodies cloned from their descendants and genetically similar to their original ones. Ch'vayre, who had returned to the future once again loyal to Apocalypse, captured the true Nathan from Boak. After Mother Askani returned similar powers to the couple, Scott, Jean, and Mother Askani successfully rescued Nathan, but Ch'Vayre severely wounded Mother Askani, leaving her in a coma.[4] Scott and Jean fled with Nathan and Mother Askani and spent the next decade raising Nathan in secret, posing as humans "Slym" and "Redd Dayspring"[5] and joining the Askani-inspired Clan Rebellion to undermine Apocalypse's empire. After over-hearing Slym and Redd speak about a raid on Apocalypse's citadel in Crestcoast with the Clan Rebellion, Nathan followed them and Mother Askani telepathically spoke to Nathan telling him how to destroy a virus of Apocalypse's and unleash his power to defeat Stryfe.[6]

After years of remission, Nathan's Techno-Organic Virus, suddenly, began to flare-up and he was beyond any medical aid, as his condition was deemed terminal. While still in a coma, Mother Askani, in her younger form, telepathically encouraged Nathan to fight back the spread of the virus and telekinetically contain it, revealing herself as the same Rachel who spoke to him years earlier. At the Apocalypse's Citadel, Slym, Redd, and Nathan attacked Apocalypse and the disillusioned Ch'vayre betrayed his master, distracting him long enough for the others to seemingly kill him and Mother Askani finally succumbed to death, leaving her to live-on in an astral form. Without Mother Askani to tether their souls to the timeline, Scott and Jean went back to their original bodies, seconds after they had left. While on the Astral Plane, Mother Askani, still in her teenage form, spoke to Jean, requesting that she assume the Phoenix identity and remember her.[1] Rachel has been seen since, aiding her brother, living-on in an astral form.

After Nathan grew well into adulthood, Mother Askani was summoned by Blaquesmith, in the modern era, where Cable, as Nathan was now called, was asked to go to the future to help his younger self. Cable was surprised to see his former wife, still young and alive, and did not remember the event in his history. Blaquesmith was weary that the Askani'son was faltering from his mission, but Mother Askani reassured him that Cable would overcome.[citation needed]

On another occasion, Cable began to worry about his new relationship, with Stacey Kramer, and Rachel appeared, in her younger astral form, to show him the importance of not forgetting his mission. Rachel took Cable to another timeline, where Sam Guthrie led a band of rebel mutants against Ahab and his Sentinels. Watching these versions of people he loved dying, motivated Cable to continue his mission.[citation needed]

Seemingly those of Rachel Summers of Earth-811, but amplified from residue from the Phoenix Force.[4]

Seemingly those of Rachel Summers of Earth-811.

Seemingly those of Rachel Summers of Earth-811.

Like this? Let us know!
Retrieved from "https://marvel.fandom.com/wiki/Rachel_Summers_(Mother_Askani)_(Earth-811)?oldid=5647338"
Community content is available under CC-BY-SA unless otherwise noted.