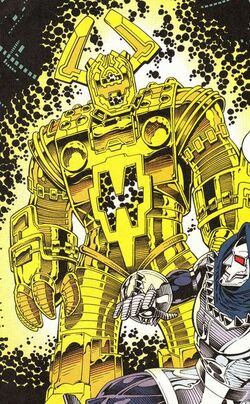 Radian is an alien sent by the Collective of the Y'lestja[1], who was present in the metallic sphere found in Himalayas.

He welcomed his masters when they came to Earth to share their memories of past explorations and communions with other species and then let go much part of his power.

Feng Huang tried to kill him but he survive as an energy form being.

He later merged with Kazimierz Rosikon[2].

He was somehow able to absorb earth's language, speaking (or telepathically transmitting thoughts) in:

He formerly wore a power suit close to those of the Celestials, but sized at his height.

Like this? Let us know!
Retrieved from "https://marvel.fandom.com/wiki/Radian_(Earth-928)?oldid=4892893"
Community content is available under CC-BY-SA unless otherwise noted.