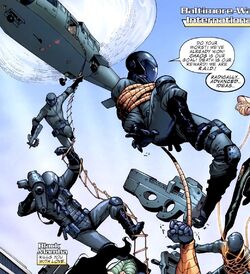 R.A.I.D. supplant HYDRA as the world's leading terrorist group after that group had been considerably weakened by James Howlett. To this end, R.A.I.D. was responsible for a superhuman terrorist strike on London. Plan A of this attack was to wipe out the Houses of Parliament, but when this was interrupted by an ad hoc team of heroes led by Union Jack, they reverted to Plan B, to cause massive civilian casualties throughout the city.[2]

Superhuman operatives attempted to destroy the Thames Tunnel, Tower Bridge and Heathrow Airport before being defeated by Union Jack and his team.[3] The terrorists also smuggled in a disassembled Dreadnought to use as a weapon of mass destruction against the city's populus. It started by attacking Trafalgar Square before Union Jack was able to bring it down.[4]

R.A.I.D. was one of the A.I.M. splinter groups taken down by Bobby Da Costa and his Avengers Idea Mechanics.[5]

Like this? Let us know!
Retrieved from "https://marvel.fandom.com/wiki/Radically_Advanced_Ideas_in_Destruction_(Earth-616)?oldid=6030241"
Community content is available under CC-BY-SA unless otherwise noted.