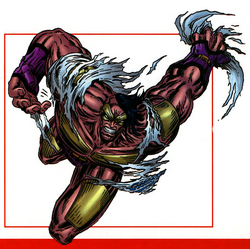 A villain calling himself Spidercide released an improved version of the Carrion Virus in Springdale, Pennsylvania, killing the entire population of the town. Spidercide and his master the Jackal later discovered that there was a single survivor. Rafael Carago was discovered by agents of the Center for Disease Control. Rafael's skin had hardened and darkened by the time CDC were able to sedate him, and he tore himself free and escaped. The New Warriors and the Scarlet Spider showed up, and beat Rafael into unconscious after he displayed his powers and attacked them.[1]

Rafael was then taken into custody by Project: Pegasus, but Spidercide replaced the helicopter pilot, and escaped with Helix. The Jackal continued to experiment on a helpless Rafael, mutating him further while trying to discover how he resisted the Carrion Virus. The Jackal was unable to discover how Helix developed his powers either, and during a clone revolt in his labs, Helix escaped.[2]

During a battle in downtown Manhattan between a hallucinating Helix and the Warriors, the Scarlet Spider was able to wrap Helix in a web cocoon, and using his stinger dart launchers to inject Rafael with the same hypermorphic serum that knocked him unconscious in their earlier battle. The serum worked and Helix reverted to his normal form. The Scarlet Spider also realized that if nobody attacked Helix, his body would have nothing to adapt to, and would return to normal.[3]

The Warriors eventually released Helix from his containment in the Crash Pad, and he slowly gained their trust. It became clear that Helix was amnesiac, and only spoke Spanish. He formed a friendship with Mickey Musashi, Turbo, due to her college-level Spanish skills helping them to communicate.[4] After a series of adventures alongside the Warriors, Helix haltingly said his goodbyes in English to Turbo, and promised to call if he needed help, then took off on a quest to find himself.[5]

Helix is a reactive adaptoid. He can instinctively recode his DNA in response to threatening outside stimuli, undergoing millions of years of evolution in mere moments. He can physically counter kinetic or energy based threats to his well-being, increase in size and strength, cancel psychokinetic energies in his vicinity, and adapt to any environmental toxin.[6]

His body automatically and unconsciously adapts to counter any threat. After the crisis has passed, his body resets itself to its baseline form. Helix cannot consciously control or trigger his ability; if he is not being actively threatened, but merely contained, his bio-enhancements fade away even if he still wants them. [7]

Variable, although his "standard form" has enhanced strength.

Like this? Let us know!
Retrieved from "https://marvel.fandom.com/wiki/Rafael_Carago_(Earth-616)?oldid=6030609"
Community content is available under CC-BY-SA unless otherwise noted.