watch 02:12
How Ragnarök Came to Pass in 'Thor: Ragnarok'
Do you like this video? 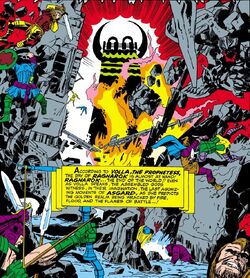 Antagonists
Loki and his army

Ragnarok is the eternal cycle of death and rebirth for the Asgardians. During this cycle, Asgard is destroyed and a number of gods will die. Eventually, the gods will be reborn and the cycle will begin anew. While each Ragnarok is largely the same, there are some differences between them.

The cycle was perpetuated by the enigmatic beings known as Those Who Sit Above in Shadow, who fed off the energies released during Ragnarok.[citation needed]

The general sequence of events for Ragnarok was once relayed by Volla the prophetess. According to her, Ragnarok will be preceded by two major events.

First, a bitter, unrelenting winter known as the Fimbul Winter,[3] will blanket Asgard, causing widespread fear and paranoia. Driven to the point of madness by the oncoming Ragnarok, infighting will break out across the land, with friend attacking friend, and brother attacking brother. Secondly, Loki will trick the blind god Hoder into killing Balder with a mistletoe.[4]

Heimdall will sound his horn, officially signalling the beginning of Ragnarok. An army of Trolls and Giants lead by Loki will charge across the Bifrost on their way to Asgard. After destroying the rainbow bridge, Heimdall will be swallowed by the invading horde. Odin will lead a counterattack and a final, cataclysmic battle will begin.

As Asgard crumbles around them, Thor and Loki will meet each other in combat for one final time, but their fight will be interrupted by the sudden appearance of the Midgard Serpent. Though Thor will succeed in slaying the Midgard Serpent, the whole realm of Asgard will be torn asunder, leaving it in ruins. From Muspelheim will rise Surtur, the fire demon, who will proceed to burn what remains of Asgard to cinders.

After untold eons, a new race of gods will rise, ushering in a new golden age.[5]

The Ragnarök is part of a cycle that repeats over and over, with variations in each era and its end.

An account of this Ragnarok was revealed to Thor by Odin's disembodied eye.[note 1]

Though it began as Volla described, with the accidental death of Balder and Loki's invasion Asgard, the events of this Ragnarok differ in a number of ways.

While defending his home from Loki's horde, Odin was killed and devoured by the Fenris Wolf. In response, Odin's son Vidar decapitated the beast with his sword. Meanwhile, Loki and Heimdall killed each other fighting atop the Bifrost. The Midgard Serpent attacked Thor, sinking his massive fangs into the thunder god's flesh. Thor managed to free himself and ultimately defeat Jormungand, but was poisoned by the Serpent's venom and died.

Surtur slew Frey before rising from Muspelheim to hurl fire across the realm. Asgard's final destruction occurred at roughly the same time as the birth of Christ on Earth.

Retrieved from "https://marvel.fandom.com/wiki/Ragnarok_(Event)?oldid=5195103"
Community content is available under CC-BY-SA unless otherwise noted.