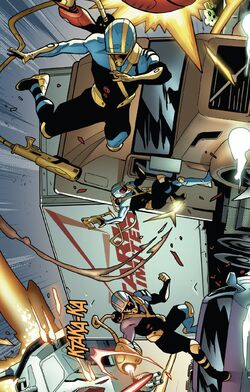 The Raiders were a group of three mercenaries employed by Edwin Cord, head of Cordco and a corporate rival of Stark Industries. Each was given a battle armor with which Cord intended to recover from the disaster of his previous Mauler Armor. They were first seen during the 24th annual Conclave of Electronics Engineers and Innovators in Dallas, Texas. At the event organizations such as Cordco, S.H.I.E.L.D, C.T.E. and Roxxon Oil Corporation showed the latest development in technology.

Cord knew that Iron Man, as Stark's bodyguard, would follow him to the trade show, and used this opportunity to demonstrate the capabilities of the Raider suits to S.H.I.E.L.D.. Under orders of Edwin Cord, the Raiders attacked the technology trade show and cause property damage until the arrival of Iron Man and Scott Lang. The Raiders skirmished with Iron Man for a moment, with one of the Raiders using acid to damage the hero's armor. During a second battle at a live boxing match, Iron Man defeated all three Raiders. The Raiders were tricked when Iron Man used his image inducer to create holograms of himself to distract all three of them. Iron Man sucker punched the group and took the fight outside where there would be a less chance of harming innocent people. After an intense battle, Iron Man prevailed and all three Raiders were apprehended. Cord later showed a film of the Raiders' exploits to S.H.I.E.L.D Agent Burke to try and get a weapons contract they formerly offered to Stark, but they were aghast at Cord's illegal means and arrested him.[1]

The Raiders reappeared with upgraded suits during the Armor Wars. Tony discovers his armor designs had been stolen and decided to retrieve or neutralize the technology, leading to a brief confrontation with the Raiders, in which their suits are rendered defunct. [2]

The Raiders resurfaced years later during the worldwide release of Tony Stark's latest invention, the eScape. The Raiders intercepted a truck transporting eScape merchandise, but they were stopped by the combined effort of Iron Man, Wasp and Jim Rhodes.[5]

Equipment: Raider Armor: Each of the Raider suits provide the wearer with greater durability and flight, and offer varying weapons systems:

Retrieved from "https://marvel.fandom.com/wiki/Raiders_(Earth-616)?oldid=5549843"
Community content is available under CC-BY-SA unless otherwise noted.