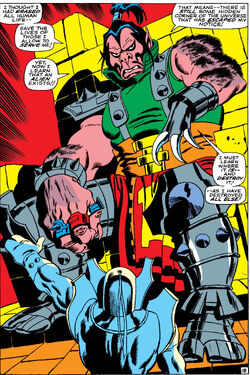 Rakkhal's father was an atomic researcher in a scientific center, in an age when atomic energy was all but abandoned in favor of magnetic energy. Not many were experienced with the ancient tech, and an accident altered the researcher's genes. Months later, when his wife announced that they were to have a child, he felt fear.[3]

The child was a mutant who grew rapidly. At four, he reached the dimensions and power of an adult, with a fury like no other. And when he reached maturity, his father understood that Rakkhal was unstoppable and invincible. Only his parents were capable of restraining him. Once they died, his savagery was unleashed.[3]

His home planet felt they had no choice but to destroy him, yet their attempt only succeeded in infuriating him, and convincing him that all who lived were his enemies. He began to destroy and conquer all in the universe, even the Earth and Zenn-La, creating a vast army of slaves who served him out of fear of death.[3]

Silver Surfer encountered him in an attempt to break the barrier Galactus had created over the Earth to prevent his former Herald from leaving the planet. By travelling at the speed of light, the Surfer was able to travel to the future where he discovered the universe had been devastated by the fury of Overlord. When even his best blows couldn't wound the Overlord, the Silver Surfer returned to the past, before the birth of Overlord, and destroyed the atomic pile his would-be father was working on. Thus the father's genes were never modified and the would-have-been-Overlord was born a normal boy who enjoyed a normal life.[3]

Superhuman Strength: Overlord has vast superhuman strength, enabling him to possibly lift around 100 tons. He has demonstrated enough strength to destroy a huge wall with a single blow.

Invulnerability: He was capable of resisting all kinds of injuries such as combined attacks from alien starships and even the most powerful energy blasts of the Silver Surfer.

Energy Projection: He has also demonstrated the ability to project a very powerful energy ray from his left hand.

Like this? Let us know!
Retrieved from "https://marvel.fandom.com/wiki/Rakkhal_(Earth-6966)?oldid=6438788"
Community content is available under CC-BY-SA unless otherwise noted.