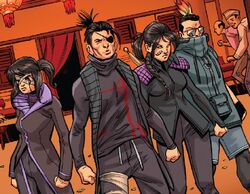 We honor the legacy of one with claws like yours. We knew him as Patch. But you would have called him Wolverine.

The Raksha were a team of ruthless mutant vigilantes operating in Madripoor. They were inspired by Wolverine, whom they knew as Patch from his time in their country.

While brutally taking down a MGH dealer, the Raksha were interrupted by Jimmy Hudson, who disapproved the lethality of their methods. Norio attacked Jimmy, but was soon subdued by his teammate from the X-Men, Marvel Girl, who arrived to assist Jimmy together with Beast. The X-Men and the Raksha engaged in a fight which was abruptly stopped by Norio himself once Jimmy popped his claws and Norio recognized their similarity to Wolverine's. After clearing up their intentions, both teams agreed to work together.[1]

During the beginning of the Mothervine crisis, the Raksha encountered a group of Hellfire Club henchmen. They infiltrated the X-Mansion to inform Magneto about their presence in Madripoor, as well as to check up on the X-Men, since they were concerned they had been compromised after hearing nothing from them for weeks. At the time, the time-displaced members of the young X-Men were off-world due to an emergency mission in space.[2] The Raksha remained at the X-Mansion under Polaris' observation, but she fell under the control of the psychic entity Malice and attacked them. Polaris managed to fight off Malice's possession, but not before having brutalized all of the Raksha except Gazing Nightshade.[3] Her teammates were hospitalized at the X-Man's infirmary afterwards, and Nightshade herself temporarily joined Polaris' makeshift roster of X-Men to help stop the spread of the Mothervine.[4]

Having recovered, the Raksha teamed up with the X-Men to take down a group of ninja MGH dealers. Since Magneto had returned to his mutant-supremacist roots and the time-displaced X-Men were preparing to return to their era, the young mutants arranged with Polaris and Danger to offer the Raksha the opportunity to become their students at the X-Mansion. The Raksha were initially reluctant, but seemed to take up the offer.[5]

Like this? Let us know!
Retrieved from "https://marvel.fandom.com/wiki/Raksha_(Earth-616)?oldid=6447386"
Community content is available under CC-BY-SA unless otherwise noted.