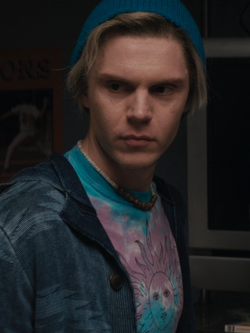 Right on, little dude! Chip off the ol' Maximoff block! You got super speed!

Ralph Bohner was a resident of Westview, New Jersey who lived right next to the plot of land that would have been 2800 Sherwood Drive.[1] After Wanda Maximoff transformed Westview into an idyllic sitcom-like reality, it attracted the attention of the rival witch Agatha Harkness.[2] She moved in to observe Wanda, choosing Ralph's house because of its proximity to Wanda's. Agatha used a magic necklace to place Ralph under mind control of her own, entirely separate from Wanda's.[1] She then assumed the identity of Ralph's "wife" Agnes to build a relationship with Wanda.[3]

Later on, Agatha "cast" Ralph to play the role of Wanda's late brother Pietro, using his "eyes and ears" to try and pry out Wanda's secret to no avail.[2] During this time, Ralph also displayed the super-speed powers of the real Pietro, presumably granted to him by Agatha's magic.[4] He was eventually freed from Agatha's control when Monica Rambeau ripped off her necklace off him, allowing his true personality to resurface.[1]

Like this? Let us know!
Retrieved from "https://marvel.fandom.com/wiki/Ralph_Bohner_(Earth-199999)?oldid=6379391"
Community content is available under CC-BY-SA unless otherwise noted.