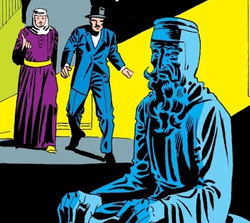 Rama Kaliph was a magician and friend of Doctor Strange. While seeking the secret of Eternity, Doctor Strange sought out Kaliph's aid, but Baron Mordo had placed the Spell of Silence on Kaliph.[1]

He was called by Clea to assist Strange in a battle against Dormammu[2] and lived as a guest in his Sanctum Sanctorum for a time.[3] Kaliph was later killed by Silver Dagger.[4]

Kaliph had at least one student, Abu Ben Hakim.[1]

Like this? Let us know!
Retrieved from "https://marvel.fandom.com/wiki/Rama_Kaliph_(Earth-616)?oldid=4784061"
Community content is available under CC-BY-SA unless otherwise noted.