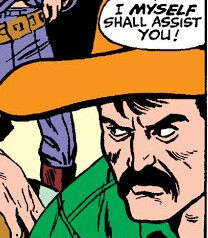 Ramon was hired by El Tigre to find the Mayan treasure. Toloc and he tried to steal the treasure from Tigre once they found it, but he neutralized them with his mental powers and bound them to his will. The mercenaries then followed El Tigre to New York. In the New York City museum Ramon used his bolas against the Beast, binding his feet and knocking him down.[1]

Ramon and Toloc tried to take the Pendant to Kukulcan, but they were knocked down by the solar powers of the God.[2]

Ramon is a normal human skilled in the use of the bolas.

Like this? Let us know!
Retrieved from "https://marvel.fandom.com/wiki/Ramon_Dantas_(Earth-616)?oldid=5035115"
Community content is available under CC-BY-SA unless otherwise noted.