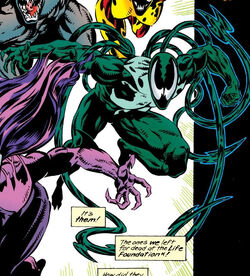 Ramón Hernández was a mercenary who worked for a sinister corporation called the "Life Foundation." The Foundation was preparing for the M.A.D.(Mutually Assured Destruction) fallout of the Cold War and sought to provide a comfortable life for their wealthy clients after the impending nuclear holocaust. The Life Foundation experimented with the Venom symbiote in the hopes of developing superhuman peacekeepers to watch over their imagined fallout shelter utopia, and Ramón was one of the three men chosen as hosts for Venom's forcibly-extracted spawn.[2]

During Venom's time as Lethal Protector of San Francisco, Lasher and his "siblings" were defeated by Venom and Spider-Man. Ramon's symbiote was artificially aged to dust and his body was caught in a massive explosion.[3]

It was later revealed that Lasher and the other symbiotes had survived due to efforts by the Life Foundation. Ramón and his siblings broke Eddie Brock out of prison and kidnapped him in a last ditch effort to communicate with their alien "others." Ramón and the group wished to control their symbiotes in an effort to do good with them. Unfortunately Eddie refused to aid them, due to Carnage's example that his "children" became psychopathic killers. During this time, Ramon and the others were pursued by a high-tech group of vigilantes who also wished to destroy all the symbiotes. Scream attacked Ramón with a sonic knife after killing the other three symbiotes, having snapped from schizophrenia and her symbiote's influence, believing that the symbiotes and any who hosted them were evil. Despite his best efforts to calm her down and reason with her, Ramón was killed, seemingly along with his symbiote.[4]

Ramón's symbiote (Lasher) survived, and was imprisoned/experimented upon in The Vault along with its siblings (with the exception of Carnage and Scream.) The symbiotes eventually merged together, and bonded with a man known as Scott Washington to form Hybrid.[5]

Like this? Let us know!
Retrieved from "https://marvel.fandom.com/wiki/Ramon_Hernandez_(Lasher)_(Earth-616)?oldid=5615082"
Community content is available under CC-BY-SA unless otherwise noted.