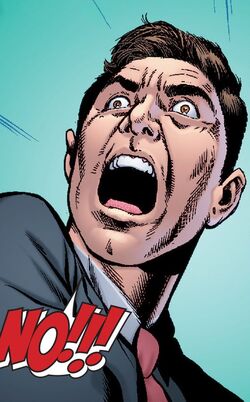 An unpopular candidate for mayor of New York City. His opponent, Lisa Parfrey, was the odds-on candidate for mayor until she was killed (or possibly assassinated) by Menace. He was backed in the election by Dexter Bennett and the DB, who did everything to back him and discredit the competition, and was also confirmed to have been running an illegal sweatshop, though it couldn't be proven because the workers couldn't testify against him. Eventually he lost the election to Bill Hollister.[citation needed]

Like this? Let us know!
Retrieved from "https://marvel.fandom.com/wiki/Randall_Crowne_(Earth-616)?oldid=5406795"
Community content is available under CC-BY-SA unless otherwise noted.