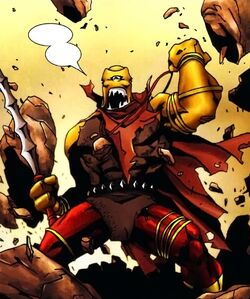 Randau was the King of the Xeronians, a peaceful alien society. When they were about to be attacked by another alien race, King Randau subjected himself to an experimental, untested treatment in the solar chamber which, using the energy of Xeron's third sun, turned him into the perfect warrior, the Space Parasite - however, he needed to feed off the energy of beaten foes to survive.[3]

After he defeated the aliens, he left their planet to find stronger opponents with the excuse of fighting potential threats for Xeron. Calling himself the Space Parasite, he left his planet for good. The Xeronians crowned a new king in his absence, and hoped that such a dangerous man would be dead.[3]

Randau went to Earth looking for the powerful Hulk and started fighting him. Meanwhile, the Xeronians found their former King using advanced technology. Realizing he had become too strong, the Xeronians decided to destroy Randau's ship as soon as he returned to it.[3]

After fighting in Rick Jones' home and in the Yankee Stadium, the Hulk finally defeated Randau, it had been too long since the Parasite had successfully fed and he had lost his strength. The Hulk threw Randau to the Hudson River but Randau came back to ask the Hulk to kill him in combat. The Hulk refused.[3]

Neglected, Randau returned to his ship and, as soon as he took off, the new Xeronian king remotely detonated the vehicle. Alone in space, Randau lived enough to understand his plight, but he also noticed he was at least at peace.[3]

Randau's actions were public and awoke the interest of The Leader, another enemy of the Hulk. The Leader confirmed that Randau had died, his corpse drifting outside Earth. When the Leader looked for a minion against the Hulk, he briefly considered the Space Parasite for that role, but the latter's dead state was a problem and the Leader chose a different villain.[4]

Later, Randu was found, rescued, revived and taken to the Prison World by the powerful alien called the Collector. The Prison World was eventually destroyed by the world devourer Galactus, with Randau's fate a mystery.[1]

He seemingly survived and at some point around the Annihilation Wave, had conquered a planet and was absorbing the life force of its inhabitants. After the defeat of the wave, Terrax the Tamer, Paibok and the Infant Terrible wound up on his planet. The trio attacked Randau, he began to absorb there energy, including some of the Power Cosmic possessed by Terrax, so Terrax attacked with a simple axe with no energy and killed the Space Parasite.[5]

After his mutation, the Space Parasite can sponge up the life energy and physical strength of victims he had defeated.[3] When replenished, the Parasite was a match for the Hulk.[1]

The Space Parasite's strength depended on whether he had absorbed a victim's power or not.[3] At his best, he could lift one hundred tons.[1]

The Space Parasite loses his power with the passing of time, unless he can defeat an enemy and replenish. When losing power, he also lost mass and size.[3]

The Space Parasite's star ship had a remote mechanism allowing the Xeronians to monitor whether the Parasite was inside, and the monarch of Xeron to detonate the ship.[3]

The Space Parasite had a star ship with orbital teleportation and long-range scanning capabilities.[3]

Like this? Let us know!
Retrieved from "https://marvel.fandom.com/wiki/Randau_(Earth-616)?oldid=6438723"
Community content is available under CC-BY-SA unless otherwise noted.