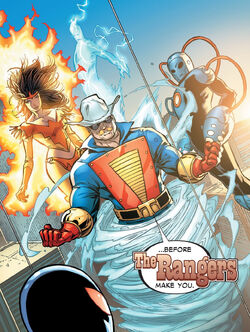 The Initiative is done. The Avengers and Fantastic Four? They might as well be on the Moon. We're all the Southwest has got.

The Rangers began basically by accident. Rick Jones was being held captive by the villainous Corruptor, who had the Hulk under his influence. Rick managed to sent a shortwave radio message to attempt to contact the Avengers.[citation needed]

Although the five Southwestern adventurers were unable to stop the Hulk's rampage, they did enable him to defeat the Corruptor. At the battle's end, Texas Twister suggested that the five of them get together whenever a threat to the Southwest crops up. They agreed and took the collective name of the Rangers. However, because of the geographical separation among the members, the first incarnation of the Rangers didn't last long.[citation needed]

Shooting Star's identity was at some point taken over by an unnamed demon in the employ of Master Pandemonium, who believed Firebird to be one of the possessors of his fragmented soul. To keep the Rangers from meeting regularly and perhaps posing a threat to him before he had completed his study of Firebird, Pandemonium dispatched the demon to take Shooting Star's place. Firebird nevertheless believed the demon to be hiding among the Avengers' West Coast branch and with her guidance the Rangers confronted the heroes, only to flush the demon in Shooting Star out of hiding. The demon claimed that Shooting Star was a human guise it had taken long before, that there never was a Victoria Star. The Avengers imprisoned the demon at their Compound and began an investigation of Master Pandemonium, but the Texas Twister, demonstrating a curious lack of concern, did not accompany them.[citation needed]

Soon, however, Texas Twister returned to the Avengers Compound at a time when Hawkeye was alone, demanding to see the captive demon. Twister declared his love for the demon, which turned back into Shooting Star. Texas Twister went on to explain that the demon had come to him months ago when Twister's powers seemed to be fading, making him afraid that he'd lose Shooting Star if their rodeo act broke up on account of his lost powers. The demon offered to augment the Twister's powers in exchange for his soul, and the Twister agreed, but after his powers were restored he begged to be spared, so the demon possessed Shooting Star instead, casting a spell that prevented Twister from telling anyone about this. Twister studied the occult until he found a means to expel the demon from Star.[citation needed]

The demon then possessed Twister himself and battled Hawkeye and Shooting Star. Ultimately, Star threatened to kill the demon rather than allow the possession to continue, and the demon reluctantly imprisoned itself in a statue. Texas Twister and Shooting Star were reunited.[citation needed]

The Rangers have recently registered as the official state super-team for Texas. Living Lightning and Armadillo have joined the original five. They recently helped protect the President of the USA from a Hydra attack.[citation needed]

During the Secret Invasion, Red Wolf's pet wolf Lobo was revealed to have been replaced by a Skrull. The Skrull was killed by the team after being discovered.[citation needed]

Like this? Let us know!
Retrieved from "https://marvel.fandom.com/wiki/Rangers_(Earth-616)?oldid=5737606"
Community content is available under CC-BY-SA unless otherwise noted.