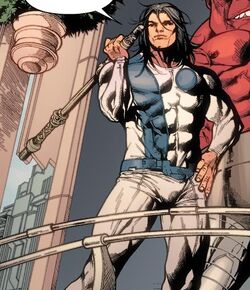 Ransak is a good guy. A deviant shunned by his people due to his handsome, yet non-monstrous face! Ransak taps into his rage and uses his power rod and flexible armor. He is known as the Killing Machine! Or Ransak the Reject because comics are great!

The secret son of Maelstrom and Medula, and thus a quarter Inhuman, Ransak was born with the appearance of an ordinary human. Thus, he was rejected and raised as a Reject among the Deviants, who shunned his non-monstrous face. Ransak did not even know the identity of his parents.[7]

Ransak was sent to gladiator rings. This being his only chance of glory, Ransak drew power from his rage and learned to fight. He used a Power-Rod as his weapon of choice, and a costume made of flexible steel as light armor. His violence and ferocity, added to his own, unique, fighting-based powers, gave him the nickname of "Killing Machine".[8]

The Deviant Warlord Kro tried to impress the Eternal, beautiful Thena, by taking her to the gladiatorial arena and watching a match between Ransak and Karkas, a hideously monstrous Deviant who was also a philosopher and intellectual. Ransak defeated Karkas by finding his weak spot, but Thena was kind to Ransak - which took him by surprise.[9]

Kro tried to get Thena's favor by saying that Ransak's genetic stability was a good omen for the Deviant people, and by offering his friendship to Ransak. Karkas convinced Thena to offer asylum to both himself and Ransak (Karkas specified that Ransak was not a "Killing Machine" per choice, but that the Deviants forced him to be one).[10]

Thus, Thena took both Ransak and Karkas to Olympia, where they would live among the Eternals.[10]

Ransak's handsome face earned him a nickname among the Eternal women: "Sweet Prince". However, Ransak the Reject was not prone to courtesy and his ferocity scared them.[5]

Ransak maintained very good terms with Thena and Karkas and went with them on different adventures, including scouting for New Lemuria. They also fought Deviants on occasion; Ransak had no regrets in fighting his own people, as they only gave him pain.[11]

Ransak, Thena and Karkas tracked infamous deviant tool-maker Zakka to New York City. Zakka was trying to use his Time-Displacer to bring up murderers from the past but was eventually killed by one of the monsters he brought back; Tutinax. Karkas and Ransak defeated Tutinax and sent him back to the past[11] - although Ransak would encounter a much older Tutinax in a gladiatorial arena years later. This second fight with Tutinax was interrupted by Quasar.[12]

When most of the Eternals chose to leave Earth, Ransak decided to remain behind. He was then sent with another Eternal, wise samurai Kingo Sunen, who would teach him warfare and discipline (although Ransak was a good learner in only the first one). Sunen also gave him roles in Japanese movies.[13] During this time, Ransak attacked a Deviant fleet in the Pacific Ocean, killing 137 Deviants without any remorse.[14]

He later joined Kro's rebellion against the government of usurper Ghaur. Ghaur managed to mind-control Ransak, but the Heroes for Hire restored his mind.[16] Ransak and Karkas assisted Kro in his efforts to reclaim Lemuria from the rule of the priesthood. He also acted as one of Kro's aide in the outside world.[17]

Ransak and Karkas were captured by Apocalypse and mutated. Ransak became a monster-looking creature resembling a lava man, but the Eternals helped him recover his previous body (notably thanks to Ransak's unique genetic mutation). Then, Ransak helped them defeat Karkas, who would also eventually be restored. Ransak took the nickname Warhead and became a member of the New Breed under the leadership of Ikaris.[6]

Ransak and Karkas's whereabouts were unknown for a time after Sprite's spell cleared out Olympia, but they eventually returned to the Eternal city.[18]

Ransak has been trained since birth to become a berserker and can enter in a rage that increases his strength and stamina to a superhuman level, and even provides him an amount of protection.

Ransak is an excellent unarmed fighter and is also good at using swords.

Ransak possesses the normal human strength of a man of his age, height, and build who engages in intensive regular exercise.

Ransak has difficulty leaving this berserker frenzy before everybody around him is dead. However, he has shown a higher degree of control when the only targets are friends, especially in the presence of Thena. Notably, Ransak has problems refusing combat whenever it is offered.[citation needed]

Like this? Let us know!
Retrieved from "https://marvel.fandom.com/wiki/Ransak_(Earth-616)?oldid=6127522"
Community content is available under CC-BY-SA unless otherwise noted.