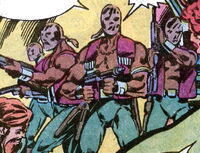 Unrelated to previous Rat Pack groups, this was a gang of criminals who ran a protection racket in the Bronx, committing arson when their victims refused to pay. They also would engage in direct thefts and hold-ups, leading to a direct conflict with Power Man and Spider-Man when the Rat Pack invaded a dance club the two heroes just happened to be visiting in their civilian identities. The duo later tracked the Rat Pack back to a building whose cellar they were using as their hideout. In trying to harm Power Man, they accidentally set their own building ablaze, whose other occupants Spider-Man rescued while Power Man captured the arsonists.

Retrieved from "https://marvel.fandom.com/wiki/Rat_Pack_(Arson_Gang)_(Earth-616)?oldid=5549858"
Community content is available under CC-BY-SA unless otherwise noted.