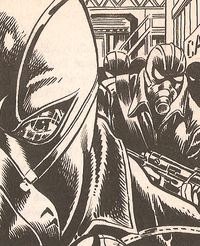 Arnim Zola hired the Rat Pack to scour the ruins of New York to find people he could use in his experiments.

Norman Osborn (under the alias of Mr. Green) hired with the Rat Pack to attack the facilities of New York every full moon. Osborn became public advocate, knowing he was next in line to become mayor, when denounced the Rat Pack raids. The Rat Pack kidnapped the mayor and brought him to Hoboken, New Jersey. Spider-Man pursued the mayor and helped him escape from the Goblin's captivity.[1]

Retrieved from "https://marvel.fandom.com/wiki/Rat_Pack_(Scavengers)_(Earth-616)?oldid=5549864"
Community content is available under CC-BY-SA unless otherwise noted.