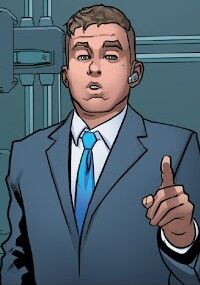 I'm sure that Raul was right because, well, Raul is always right.

Raul was the assistant of Miguel O'Hara during the former's time at Parker Industries. He and Miguel were able to pull the funding the Blackthorne Prison.[1] At Miguel's behalf, he located Dr. Alexi Cronos.[2] Raul and his assistant when to Saint Patrick's Cathedral after learning that Jasmine's missing girlfriend had gained superpowers and was terrorizing the church. The NYPD wouldn't let anyone in the church so Raul punched an office, giving Jasmine the opportunity to run into St. Pat's and stop Rhonda's rampage.[3] He was taken to the 17th Precinct Station House, where Miguel paid his bail and sent him back to Parker Industries.[4]

He and Jasmine were sent by Miguel to Chicago to represent Parker Industries in a environmental convention. As they arrived in McCormick Place, he was scratched by Medea and collapsed with a fever. During his time at Chicago General Hospital, he transformed into a Zombie. He attacked Jasmine and almost killed her until the curse was lifted.[5]

Like this? Let us know!
Retrieved from "https://marvel.fandom.com/wiki/Raul_(Parker_Industries)_(Earth-616)?oldid=5684345"
Community content is available under CC-BY-SA unless otherwise noted.