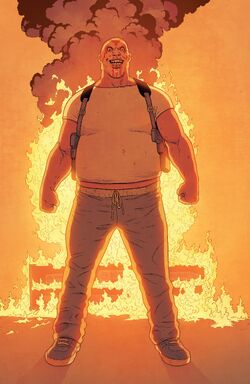 Bushman worked as a mercenary in Africa. Bushman, alongside Marc Spector, "Frenchie" Duchamp, and his men, came upon Dr. Peter Alraune and his daughter Marlene in order to steal the Egyptian gold Alruane had discovered. When Bushman killed archaeologist Peter Alraune to find an Egyptian pharaoh's tomb, Spector punched Bushman to protect Alraune's daughter Marlene. Furious, Bushman mortally wounded him in the desert, killing everyone in the place except for Marlene, Frenchie, and a villager willing to tell him the secrets of the tomb. While lying near death, Spector encountered the spirit of Khonshu and adopted the identity of Moon Knight. In this new guise, Spector defeated Bushman.[6][8]

Much later, Bushman attempted revenge against Spector while he was in the United States. Failing that, he set himself up as General and President for life in the African Republic of Burunda. He funded his campaign on coca plant cultivation (for cocaine production). Defeated by Moon Knight once again, Bushman was deposed from his position in Burunda. Still, later, Bushman engaged in a quiet assassination attempt on Russian ambassadors in an attempt to end Glasnost. He was defeated by Moon Knight and taken into police custody where he remained for some time.

Bushman is easily recognized by the white tattooed Death's Head mask on his face and the steel fangs that he sometimes employs. When Bushman appeared in his undercover attempt to assassinate Russian ambassadors, the Death's head tattoo seemed to be gone and its only remainder was a dark, less conspicuous, manta ray-like design on the forehead.

Finally, Bushman was seemingly killed by Moon Knight after a brutal rooftop battle. In an attempt to bring their feud to an end, Moon Knight uses the sharp end of his Crescent Dart to carve off Bushman's face.[9] After this, Spector believed he was continually visited by Khonshu in the form of a faceless Bushman, so that he was reminded of "his greatest work."[10]

Bushman was supernaturally resurrected by criminal overlord The Hood to be recruited as part of his force, which included Ghost Rider foe the Scarecrow, to combat Moon Knight after he returned to New York.[11] When investigating a warehouse at the docks, Moon Knight was ambushed and shot by Bushman, the two engaged in a violent fight and Bushman ended up impaled by a machine gun. As Moon Knight was about to carve off Bushman's face once more, a vision of Khonshu appeared, yelling at Moon Knight to obey him. Bushman pleaded for Moon Knight not to take his face off and Moon Knight reluctantly left it intact.[12]

Bushman survived and was interned in Ravencroft Institute,[12] nonetheless he eventually got out and began dealing crack and arms alongside Crossfire.[13][14] He was eventually approached by the Sun King, who wanted his help to kill Marc Spector. Bushman initially dismissed him, at first, but after witnessing his powers, he gathered all his men and told them it was time to get their revenge.[15] Together, they forced Spector's ex-girlfriend Marlene Alraune to get Marc to her house.[14] In the subsequent fight, the villains escaped with Marlene[16] and Bushman used her as leverage to force Moon Knight to travel with him to the Sun King's base of operations in Isla Ra. During the boat trip, Bushman taunted Marc and threatened Marlene. Despite being restrained, Moon Knight broke free and beat up Bushman, using one of his Crescent Darts to cut off two of his fingers.[7] As soon as the Sun King was defeated in a ritual combat against Spector, Bushman fled.[17]

Bushman was seen again working with Baron Zemo (Helmut Zemo) and Taskmaster,[18] before being captured and incarcerated in Ravencroft Institute.[19] He escaped not long afterwards, however, alongside most of the inmates.[20]

Food Addiction: While under the influence of The Truth, Bushman admitted that he had developed an eating addiction to cope with feeling powerless against Moon Knight. This resulted in Bushman becoming overweight.[16]

Like this? Let us know!
Retrieved from "https://marvel.fandom.com/wiki/Raul_Bushman_(Earth-616)?oldid=6494804"
Community content is available under CC-BY-SA unless otherwise noted.