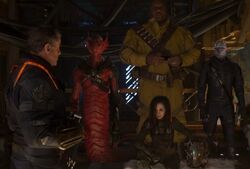 The Ravagers are a network of mercenaries and thieves, divided into groups under various leaders. One such group, under the command of Yondu Udonta, was hired by Ego to bring his progeny to him from throughout the galaxy, and in doing so Yondu betrayed the Ravager code effectively severing his group from the other Ravagers. Yondu eventually reneged on his agreement with Ego when he went to recover the seven-year-old Peter Quill after the death of the boy's mother. However, instead of sending Peter to his father, Yondu decided to raise the boy among the Ravagers.[1]

Twenty-six years later, Peter double-crossed Yondu when he went to retrieve the Orb of Morag, causing Yondu to put a bounty of 40,000 credits on Peter's head. The Ravagers caught up to Peter at Knowhere after Peter signaled his location to them in order to save the life of Gamora.

The Ravagers were convinced by Peter to assist in stopping Ronan's assault on Xandar, and committed their fighters in the air over Xandar's capital as a diversion for Yondu and Peter to enter Ronan's ship, the Dark Aster. When the Dark Aster broke through the Nova Corps fleet the Ravagers dived down to provide defensive cover for the city themselves.[2]

Some time later, Yondu's group of Ravagers made another attempt to catch up with Peter Quill on Berhert where the Milano had made a crash landing, but missed him by a matter of hours. The group initially ran afoul of traps set by Quill's crewmate Rocket before Yondu cornered Rocket with a yaka arrow. Taserface, one of Yondu's crew, promptly seized the opportunity to stage a mutiny, and captured Yondu along with the remaining Guardians of the Galaxy and took them back to the Ravager ship. There he proceeded to order any remaining loyalists out of the airlock while Yondu could only helplessly look on.

Salvation came to the captives when Kraglin Obfonteri turned on Taserface and handed over Yondu's prototype control fin. Together Yondu, Kraglin, Rocket and Groot decimated the mutineers and fled their ruined ship. The quartet then turned their attention back to reuniting with Quill and the others who they soon learned were in mortal danger at the hands of Ego. The two Ravagers served valiantly alongside the Guardians, but the fight to rescue Quill cost Yondu his life. When word of his demise reached other groups of Ravagers, Ravager ships assembled from far off corners of the Galaxy to pay tribute to their fallen comrade who had redeemed himself in his final days.[1]

Retrieved from "https://marvel.fandom.com/wiki/Ravagers_(Earth-199999)?oldid=6083347"
Community content is available under CC-BY-SA unless otherwise noted.