Ravencroft Institute for the Criminally Insane 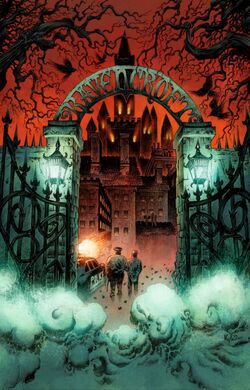 Ravencroft Institute for the Criminally Insane, or Ravencroft Institute, was a large sanatorium in Westchester County, New York.[1] The place later grew to one of the leading maximum-security facilities in the country specializing in the treatment of superhuman criminals.[2]

The land where the Ravencroft Institute was built was seen as cursed by the local indigenous tribes since before the 15th century, having been claimed as the territory of a cannibalistic cult that worshiped the dark god Knull.[1]

Giovanni da Verrazzano was exploring the region in 1524 when some of his men went missing. He led a search party for the missing men and eventually found the men's remains on the land. His men had been skinned and chopped into pieces, and those pieces were arranged into a spiral. Verrazzano was so spooked by what he saw that he ended his exploration of the continent early.[1]

The first holding facility built was a single wooden cell constructed in 1664 to house Cortland Kasady, a settler who had been driven insane by the cult and become a murderous cannibal. Cortland escaped, murdering his wife Molly Ravencroft.[1]

In 1783, one of the final battles of the American Revolutionary War took place on the land. It was during the battle that the "original Captain America" was killed by a rogue cannonball.[3]

In 1804, a cult that worshipped the extra-dimensional creature Shuma-Gorath was formed on the land.

In 1820, the region was visited by the Headless Horseman the wielder of the Spirit of Vengeance.

In 1862, Tyrannus led an invasion of Tyrannoids from Subterranea, bursting through the ground interrupting a battle during the Civil War.

In 1891, the Skrulls landed in the region to begin an clandestine invasion Earth. One of them took the form of Teddy Roosevelt.[3]

At the end of the century Dr. Jonas Ravencroft, a descendant of Molly Ravencroft, founded a maximum-security psychiatric facility on the spot where his ancestor had been murdered. The construction of the facility was met with protest by the locals with a fire being started on the ground. One of the workers claimed to have been told by Mephisto to cave the foreman's head in with a hammer, but finally the building was completed.[3]

Jonas kept a journal of the region's dark history and the sinister occurrences that transpired. Ravencroft's journal was buried in the building's foundations, where it was preserved for centuries.[1]

In 1909, Jonas continued to receive the country's most unusual patients, one being a man claiming to be Sir Percy of Scandia. He also took on two new doctors: Dr. Nathaniel Essex from England and Dr. Claudia Russell from Romania. Another patient was a man named Logan, who was being accused of being the "Knickerbocker Knifer" serial killer. One of the orderlies came to confront the man, revealing himself to be Victor Creed. He was stopped by Dr. Essex, who wanted the man's arm. Later, Dr. Russel learned about his treatment and tried to save him. She was confronted by Creed, who tried to kill her, but she turned into a werewolf and attacked. She was tranquilized by Dr. Essex, who sent a letter to Dr. Ravencroft from Dr. Russel claiming to have resigned before vivisecting her in his experiments. Dr. Essex eventually left the institute, but not before creating a hidden laboratory with many unusual specimens.[3]

In 1918, they locked up the Master of World, a man claiming to be a 40,000-year-old caveman, though the doctors figured his age to more likely be around 40 years old. In 1923, a young Al Capone and Silas Burr escaped from the institute. In 1932, a strange creature known as the Skin Walker was brought to the facility.[4] In 1933, Loki of Asgard was briefly an inmate, though he escaped easily and transformed the faculty's clothing into straitjackets as a prank.[4]

During World War II, Weapon Plus commandeered the institute and conducted experiments on the inmates with the aid of Count Dracula and turned several of them into vampiric monstrosities. When Captain America and Bucky Barnes attacked the institute looking for a friend of theirs, Jonas Ravencroft unleashed the vampiric monsters on the Weapon Plus personnel before committing suicide.[4]

Towards the last quarter of the century Louise Kasady was sent to the institute and given un-sedated electroshock therapy while pregnant; the apathetic doctors provided no assistance to her while she was giving birth or her child Cletus when he was born with a nuchal cord.[5]

The US government assigned Dr. Ashley Kafka to run the the Ravencroft Institute after she demonstrated great psychiatric skill in treating super-criminals. One of her first patients there was Vermin, a former orderly turned into a rat-like monster.[2]

Cletus Kasady became a notorious serial killer before he was captured and sent to his birthplace. However, when they did blood tests, the Carnage symbiote re-awoke and killed the guards and the doctors. While Carnage was busy with his murdering he met Shriek, who was locked in a cell. He released her to increase his ratio of kills per time.[6]

Dr. Judas Traveller was fascinated with the nature of evil and visited various villains at the facility. He learned of their hatred towards Spider-Man, and he used his powers to take control of the institute and lure the web-slinger. Then he posed an ethical dilemma to Parker: If Spider-Man failed, all the inmates would be killed. However, if Traveller was defeated, they were to be set free.[7]

After the M-Day, Sally Floyd came to Ravencroft Asylum to see the results of the Scarlet Witch's reality-warp on the mutant patients. There she found only three powered mutants instead of the 77 who were residing in the Asylum before the "flash", including Prism. The remaining powered mutants avenged themselves on the other patients who bullied them.[8]

Vengeance of the Moon Knight

Aided by Scarecrow, Bushman and the Hood broke into Ravencroft, slaughtered the staff, released the Great Wall and Herman the German, and lobotomized dozens of the other patients to create an army for use against Moon Knight.[9] Moon Knight defeated Bushman, who suffered a psychotic break and was admitted to Ravencroft.[10]

The criminal Massacre was placed in Ravencroft. However, he soon escaped and shot Dr. Kafka in the process.[11]

When Cletus Kasady was reanimated and took control of the Knull-worshiping cult, he had Jameson - whom he had infected with an offshoot of his symbiote - kill the guards and lure Spider-Man and Venom into a trap. Kasady infected the inmates with pieces of his symbiote, turning them into Carnage doppelgängers.[12] Carnage claimed the asylum as a base for the cult, resurrecting Demogoblin using Frances Barrison as a sacrifice.[13] However, Deadpool unwittingly interrupted the cult's rituals and burned the asylum to the ground to escape.[14]

Crimelord Wilson Fisk - using his influence as mayor of New York - financed the cleanup of the destroyed asylum, intending to have it rebuilt to further his own nefarious purposes. During the cleanup, Jonas Ravencroft's journal was discovered, as was as an underground facility hidden under the south wing.[1]

Despite Reed Richards' efforts to ensure that the rebuilt Ravencroft Institute was a proper psychiatric institution, it was rebuilt as a prison for dangerous supervillains, with John Jameson lamenting that history would only repeat itself.[4] Proving this prediction true, Fisk hired supervillains Norman Osborn, Tony Masters, Mac Gargan, Karla Sofen, and Roderick Kingsley as staff members.[15]

After being resurrected by Kindred Sin-Eater and his followers assaulted Ravencroft in order to cleanse Norman. After he absorbed Juggernaut's powers, he began wrecking havoc across the building trying to get to Osborn, who had allied himself with Spider-Man.[16] Because of the damage caused by the fight between them, Ravencroft eventually collapsed.[17]

On Earth-120703, Ravencroft operates a prison for the criminally insane. One of its latest prisoners was the mutated supervillain Maxwell Dillon. He was eventually freed by Harry Osborn who wanted his help in breaking into Oscorp's headquarters. After Harry was apprehended by Spider-Man, he became a prisoner of Ravencroft.[18]

On Earth-TRN852, Ravencroft acted as a prison for the criminally insane. Instead of being located in Westchester County on New York, it was located in Washington, D.C. The Silver Witch was taken to Ravencroft by the Blur after he defeated her. As she was taken away to a cell, Silver Witch stated that she wasn't crazy but the outside world. Secretly, the inmate Phoenix from Earth-616 used her powers to keep the other inmates in check, one of them being Bullseye. While on Ravencroft's roof, Phoenix was approached by Blade of Earth-616 and Captain America of Earth-TRN852 who wanted her to joined their team the Avengers to restore reality to its proper state.[19]

The Goblin once staged a takeover of Ravencroft in order to lure Nighthawk to the prison. Nighthawk helped take back the prison after defeating a number of prisoners and badly injured the Goblin. The Goblin told Nighthawk that he orchestrated the whole scheme so he could to tell him not to change reality back to the way it once once as he liked its new form.[20]

Like this? Let us know!
Retrieved from "https://marvel.fandom.com/wiki/Ravencroft_Institute?oldid=6990465"
Community content is available under CC-BY-SA unless otherwise noted.