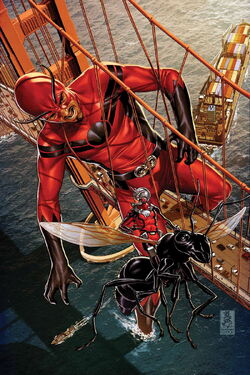 Raz Malhotra was born to Indian immigrants in Denver, Colorado.[1] In college, Raz's field of study was artificial intelligence. Unfortunately, the A.I. divisions of numerous companies shut down right before Raz graduated following Hank Pym's change of heart regarding the nature of these beings, and his subsequent attempts to rid the world of them. No longer with a chance at the job market of his career of choice, Raz saw himself forced to work at a tech-support company called Techbusters once he moved to San Francisco.[2]

Criminal scientist Dr. Elihas Starr read Malhotra's dissertation, "Breakthroughs in Moral Paradigms for Artificial Intelligence," and lured him into his lair, under the guise of wanting support for his MacBook. When Malhotra arrived to Egghead's base, the villain revealed his true intentions, of wanting Malhotra to use his knowledge to power up artificial duplicates of the Avengers he had stolen from Hank Pym. Malhotra repudiated Egghead's evil intentions, forcing the villain to use a neural override device to control him.

Hank Pym and Ant-Man arrived to the scene, having followed Egghead's trail, and Malhotra subsequently unleashed the artificial Avengers to attack the heroes. Pym tried to use a kill switch to deactivate them, but Raz had already overridden the programming. The neural override device used on Raz broke down during the fight, and he was able to regain free will. After contemplating what he had caused, Raz accessed the A.I.vengers and shut them down, even after being threatened by Egghead. The villain was then knocked out by Pym.[2]

Months later, during an attack by Ultron, Pym seemingly perished. He left one of his labs to Scott Lang, who recalled their encounter with Raz and sent him a present: the Giant-Man's Suit.[2] Early in his superheroic career, Raz tired to stop the costumed criminal Unicorn but got trapped within the Golden Gate Bridge during the conflict.[3]

Upon reuniting with Ant-Man, Raz (as Giant-Man) assisted him in going to confront Power Broker at his public event when he was promoting the Hench App 2.0. They ended up fighting the female Blacklash who was guarding the event. Due to Giant-Man's lack of experience, Blacklash took the opportunity to get away. After that, Scott offered to train Raz in Miami while Raz took care of the lab Hank left Scott, which he accepted.[4]

At the time when Ulysses Cain had a vision that tipped off Blue Marvel about the Infinaut's ninth manifestation attempt, Giant-Man helped the Ultimates build a Pym Particle Accelerator to anchor him and reduce him to the size of a human, which allowed him to enter this space without causing danger for himself and the Earth.[5]

Once Raz returned from space after helping the Ultimates with tech support, he found himself unemployed due to Ant-Man's security firm, Ant-Man Security Solutions, closing down. To make matters worse, Raz's boyfriend, Kyle, had decided to move on from him due to his earlier move to Florida. Raz lived in the apartment of two of Ant-Man's former allies, Grizzly and Machinesmith, for a short time before they kicked him out when they moved.

Having nowhere else to go, Raz swallowed his pride and prepared to return to Denver. Once he arrived, he discovered the city overrun by Hydra. It turned out that during the time of his extremely lengthy bus trip, Hydra had taken over the United States. After saving his family from Hydra's oppression, Raz joined the rebel coalition known as the Underground.[1]

Malhotra later joined the Agents of Atlas to protect the city of Pan.[6] He developed a “friendly” relationship with Isaac Ikeda, and a picture of them kissing was broadcast on several billboards as an advertisement for Pan.[7]

Skilled Hacker & Computer Programmer: Raz is a gifted hacker with an expertise in artificial intelligence and robotics, as well as a working knowledge of biochemistry.[8]

Giant-Man's Suit: The suit allows Raz access to Pym Particles which allow him to grow to gigantic height as Giant-Man. The growth process requires the rapid acquisition of bodily mass from an extradimensional source. This extra dimensional mass fortifies all of his cellular tissue, including his bones and muscles, enabling him to support his increased weight, and giving him superhuman strength and durability. He is capable of growing hundreds of feet tall.[2]

Like this? Let us know!
Retrieved from "https://marvel.fandom.com/wiki/Raz_Malhotra_(Earth-616)?oldid=6190539"
Community content is available under CC-BY-SA unless otherwise noted.