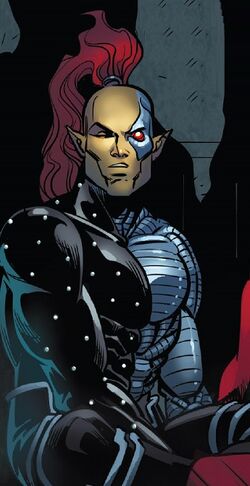 The Starjammers are a group of renegade space pirates in the tradition of old English buccaneers. The original Starjammers, Corsair, the leader, Ch'od, Hepzibah, and Raza met in the slave pits of the Shi'ar Empire. This was during the reign of D'Ken the mad when atrocities of the Empire were many. Thus, when the four escaped and stole a starship, they swore vengeance on the tyrannical government that had enslaved them. They are named the Starjammers because that is the name of their ships (of which they have at least two). Soon others joined the Starjammers to fight for freedom.[2][3]

The Starjammers first met the X-Men when they teamed up to fight the Royal Elite Imperial Guard, who were protecting the insane D'Ken. In a roundabout way, the Starjammers were responsible for putting Lilandra on the throne, and she stopped the Empire's attempts at capturing the Starjammers.[4]

Later during Vulcan's reign as Majestor of the Shi'ar, Raza was captured and forced to host the symbiote Zzzxx.[5] The symbiote forced him to join the Shi'ar praetorian guard and commit horrific war crimes at Vulcan's command. Eventually, he was captured on Kree-Lar by the Nova Prime after exterminating prisoners of war, including Nova Corps peacekeepers. As Nova took the Praetorians as prisoners for their war crimes, he used the Nova Corps' resources to try to find a way to safely separate Raza from the symbiote and rejoined the Starjammers.[6][7]

Like this? Let us know!
Retrieved from "https://marvel.fandom.com/wiki/Raza_Longknife_(Earth-616)?oldid=5722491"
Community content is available under CC-BY-SA unless otherwise noted.