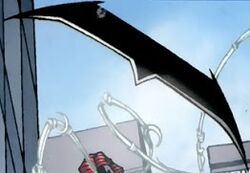 Razor Bats were among the arsenal of weapons Norman Osborn created for use as the Green Goblin upon upgrading his arsenal with the intent of unmasking Spider-Man.[1] Bat-shaped shuriken capable of lacerating and stabbing opponents, they could be used to sever Spider-Man's web-lines and could also be coated with chemicals to dampen Spider-Man's Spider-Sense. [citation needed]

In Earth-96283, the Razor Bats were a variant of Pumpkin Bomb that sprouted rotating wing-shaped razor blades when thrown, and were capable of flight and homing in on a target.[3][4]

Like this? Let us know!
Retrieved from "https://marvel.fandom.com/wiki/Razor_Bat?oldid=6431822"
Community content is available under CC-BY-SA unless otherwise noted.