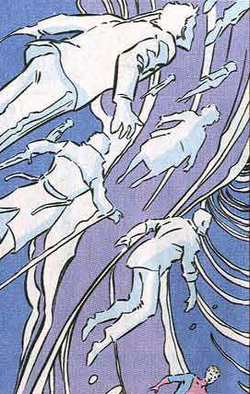 The Realm Between, Purgatorius,[1] 'Purgatory,[citation needed], Limbo[1], First Circle of Hell is a nether realm or void of in which souls go before they are judge to go to Heaven or Hell. The Gateway to Hell can be found here. Once through the gate the soul is ferried along the Styx River by the ferryman Charon to the Second Circle of Hell to be judged.[3] The Valkyrior also pass through the Realm Between while ferrying souls to Valhalla, with the duration of the crossing depending on how long it takes for the soul to come to terms with its death.[4]

After drinking an antidote concocted by Dr. Octopus, Peter Parker ascended to the lower astral plane, where he met the ghost of Nick Katzenberg; not wishing to die, he returned to Earth, where the soul of his Aunt May showed him the way.[5]

After meeting and greeting the spirits of Harry Osborn, Uncle Ben, Richard, and Mary Parker, Peter decided to come back to the realm of the living.[6]

After being killed by Deadpool, Peter once again entered Limbo. He was let in by the soul of Madame Web but was trapped by Mephisto and Mysterio. Mysterio tortured him until Deadpool came to rescue him. After teaming up and defeating Mysterio, Parker was confronted by Mephisto and Wilson by Death until both were brought back by Deadpool's wife, Queen Shiklah.[7]

Like this? Let us know!
Retrieved from "https://marvel.fandom.com/wiki/Realm_Between?oldid=6025571"
Community content is available under CC-BY-SA unless otherwise noted.