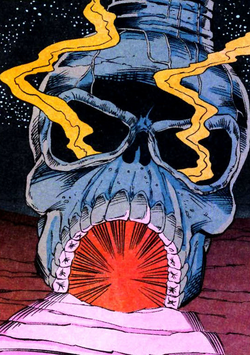 During the Infinity War, Thanos was spiritually abducted by Death into her royal palace.[1]

In Earth-94535, Deadpool spewed chaos across the Realm of Death. This accumulated with his successor blowing up her Probability-Based Quantum Armor to kill them both. Afterwards, Wade's soul ended up in the Realm of Death and he became co-ruler of the dimensions alongside Death.[2]

Like this? Let us know!
Retrieved from "https://marvel.fandom.com/wiki/Realm_of_Death?oldid=5529875"
Community content is available under CC-BY-SA unless otherwise noted.