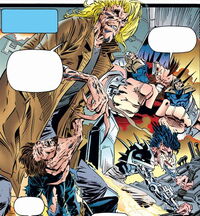 Base of Operations
Moble
Affiliations

The Reavers were cyborgs created by Donald Pierce who worked as mercenaries loyal to Apocalypse. Apocalypse allowed them to survive as humans in his domain due to their enhanced cyborg nature and for providing their technology to him.[1]

In order to covertly attack his enemies, the Human High Council, Apocalypse had the Reavers smuggle themselves aboard a Sentinel evacuating the remaining humans from North America, knowing that their cyborg nature would allow them to slip past the security in Europe without issue. Learning that the Human High Council was plotting a nuclear strike -- thanks to insider information from traitor Brian Braddock -- Peirce, Slocum, and Clegg attacked the airships, destroying their manual controls. The mutant mercenary Weapon X clashed with them, slaying Slocum and Clegg, but Pierce would escaped[2]

When Weapon X traveled to Wundagore Mountain to convince the mutant teleporter Gateway to help teleport the airship strike force to America, he was attacked by Pierce, Dead Eye, Mangle, and Vultura. Weapon X destroyed Dead Eye, Mangle, and Vultura with the aid of his friend Carol Danvers, who sacrificed herself in battle, seemingly slaying Pierce.[3]

Pierce survived, and using scrap components from other slain Reavers, turned Carol into a loyal cyborg. They attacked the airfleet one more time, with Pierce killing Brian Braddock in the process. In the final conflict, Weapon X convinced Carol to shake off Pierce's conditioning only for her to be slain by Pierce as well. Furious at seeing his friend killed, Weapon X surprised Pierce by impaling him with the claws hidden in the forearm of his severed hand, seemingly killing him instantly.[1]

Retrieved from "https://marvel.fandom.com/wiki/Reavers_(Earth-295)?oldid=5549889"
Community content is available under CC-BY-SA unless otherwise noted.