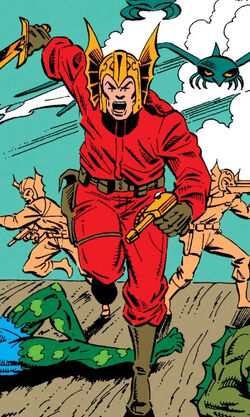 The Reavers of Arcturus exist in an alternate timeline. The origins of the Reavers have not been revealed. They are a military force that originated on the planet Arcturus IV some time prior to the beginning of the 21st century. When first seen, they attacked a group of the mutates of their planet, during which one of their number, Ogord, found an apparently normal humanoid infant. Believing the infant to be one of their own, Ogord brought it back to their city, where it was adopted by his family as one of their own, and raised alongside his daughter, Aleta. The infant was named Stakar, and eventually both he and Aleta were drafted into the Reavers. Stakar and Aleta eventually merged into a single being to become Starhawk after somehow absorbing the power of the ancient Hawk God. Ogord was overjoyed that his children had gained this vast power, and planned to use it to carve an empire across the universe. When Starhawk refused to serve him and left Arcturus, Ogord swore he would have vengeance.

Five hundred years later, The Reavers, now a space-faring race, attempted a first contact seizure of an alien aircraft. Starhawk arrived and foiled the attack, after which his death was declared a fleet imperative. Around the thirty-first century, Ogord, now leading the Reavers, dsicovered the means to have his revenge. An elite Reaver starship stumbled upon an asteroid lair which had a self-contained atmosphere, which was the home of Stakar and Aleta's three children, John, Sita, and Tara. Ogord ordered their capture, and subsequent testing proved the children had vast latent power.

Both Stakar and Aleta were aware of their children's capture virtually instantly. After the Guardians escaped from the Topographical Man/Karanada, they led the Guardians back to the asteroid lair, where their ship, the USS Captain America, was captured in a Reaver energy trap. While Starhawk teleported out to confront Ogord, Brutag and a squadron of Reavers boarded the Guardians ship. The Guardians destroyed Brutag and defeated the squadron, but the energy trap began to destabilize their ship, causing it to explode. However,the Guardians succeeded in boarding a nearby Reaver ship, the Kammar, which they then took over, and forced the pilots to direct them to Ogord's ship.[citation needed]

Starhawk confronted Ogord, but found that Ogord's scientists had taken control of his children, accessing their powers and forcing them to attack him. At Ogord's command, the children blasted Starhawk, who succumbed to their attack and could not bring him self to fight back. The rest of the Guardians soon arrived, but Starhawk's children were killed in the process of removing the Reavers' mind-control devices. Starhawk was emotionally crushed by the loss, while Ogord grieved not for the lives of his own grandchildren, but for the loss of their power. The Guardians left Ogord, a broken man, and the decimated, leaderless fleet allowed them to escape.[citation needed]

Retrieved from "https://marvel.fandom.com/wiki/Reavers_of_Arcturus_(Earth-691)?oldid=5549899"
Community content is available under CC-BY-SA unless otherwise noted.