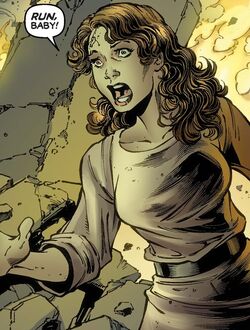 Rebecca Banner was the mother of Bruce Banner, who eventually grew up to become the Hulk.

During college Rebecca met and married Brian Banner and was anxious to start a family with him but he didn't feel the same way about starting a family like her, Brian never shared his personal history with her or of his desire to never have children. He was the youngest person to graduate from his college with a Ph.D. and he got his degree in physics. His post-graduate options were unlimited but he settled on going to Los Alamos to work on a government project to find a source for clean nuclear radiation.[citation needed]

The stress of the job led Brian to start drinking which also led him to become more erratic and quick to anger with Rebecca and his fellow employees. After one night of excessive drinking, Brian tried to work on his project and accidentally caused an overload of the equipment. He consequently was court-martialed and released from the project.[citation needed]

Even though he was behind a shield when the overload occurred and multiple doctors examined him and found nothing, Brian still felt that some amount of radiation got through and affected his genetic structure and was even more convinced not to have any children. Brian eventually found a job and started to try and pull his life together when Rebecca announced that she was pregnant leaving him shocked.[citation needed]

Pregnancy and birth of Bruce

Rebecca had problems during the pregnancy although what the complications were are not known. After the birth in Dayton, Ohio, Bruce was kept in extensive care for observation and examination but the doctor's found nothing out of the ordinary. He was also examined for any trace radiation due to Brian's exposure but none was detected. Brian, still thinking that something was wrong with Bruce, would try to spend as little time as possible with him. When Brian and Rebecca would go away, they would leave Bruce with a nanny who showed no affection or attention towards Bruce. On Christmas morning, when Bruce was approximately four years old, he woke up early and snuck down to the Christmas tree.[citation needed]

He opened one of his presents, which was an erector set. He managed to put together a very intricate structure in little time. Brian came down and smashed the structure, saying that Bruce was a freak and that someone his age should not be able to do that. He thought that the radiation had altered his Bruce's brain, making him super-smart, and would have probably killed Bruce, had Rebecca not come into the room at that moment.[citation needed]

Rebecca tried to get in the way and Brian hit her. When Bruce tried to run to his mother, Brian hit him also. Brian looked at Bruce and called him a inhuman monster. It was finally now that Brian admitted he never wanted a child.[citation needed]

A few years later, after much physical and mental abuse to both Rebecca and Bruce, Rebecca packed suitcases and tried to leave with Bruce. Brian caught them at the car before they leave and started to struggle with Rebecca. Bruce yelled to his father to let his mother go and that he would be good but Brian threw Rebecca to the ground and killed her. Bruce ran to her side and just sat there frozen in shock beside her lifeless body.[citation needed]

It is at this point where Bruce shut down his emotions and became a repressed personality. After that event, Brian was placed under arrest and sent to a mental hospital, while Bruce was sent to live with his aunt, Susan Drake. When he grew older, Bruce attended Science High School. Due to his extremely high intelligence level and the fact that he had for all practical purposes turned off his emotions years ago, he had no friends at the school and was subjected to harassment. The headmaster showed concern for Bruce and his unresolved anger and feelings about his father and his mother's murder.[citation needed]

Rebecca Banner (alongside Brian Banner) was among the people that return from the dead after what happened to the death realms. Brian in a form similar to Devil Hulk tried to kill her again only for the Hulk to save her and fight Brian Banner.[citation needed]

Like this? Let us know!
Retrieved from "https://marvel.fandom.com/wiki/Rebecca_Banner_(Earth-616)?oldid=6431641"
Community content is available under CC-BY-SA unless otherwise noted.