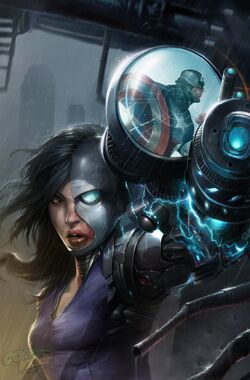 Umm...no. Maybe you used to be a Becca--But now you're a flesh-wrapped killbot murder machine. And while I'm sure the meaty half of your brain is sweet as kittens...the rest of you is a Deathlok--ette.

Rebecca "Becca" Ryker was once an average girl.[2][1] She was shy and bookish without many friends, and always followed the rules.[1] Even though she didn't really enjoy it, Becca was part of her school swimming team and practiced swimming laps every day.[2][1]

Unbeknownst to her, Becca's father was one of the premier expert in cybernetics and the lead designer of the Deathlok program. When rebels from the future sent a Deathlok to kill Harlan they instead found his family. On a suicide mission, the Deathlok exploded nearly killing Becca, and successfully murdering her mother and her baby brother. Grief-stricken, Harlan tried to save the lives of his wife and children by adding Deathlok cybernetics. He locked himself in a bunker and cut all communication, but was only able to save Becca's life. Unfortunately, S.H.I.E.L.D. broke into lab, arrested him, and took Becca into custody. Becca was stabilized in the hospital.[2] Sadly, Becca was one of the sixteen super-powered teenagers Arcade kidnapped to be part of his deathmatch.[3] S.H.I.E.L.D. briefly investigated her disappearance from their facility, but the incident was attributed to more future rebels completing the mission.[5]

When Arcade killed Mettle, Becca felt sorry for Hazmat and went to console her. However, Hazmat's sadness quickly turned to rage. When Hazmat tried to attack Becca, her Deathlok self-defense programming responded by blasting Hazmat. Still, in shock from the events, Becca ran and began wandering in Murderworld. Becca was briefly ambushed by Cammi, before later being caught by Kid Briton when she wandered too close to the Braddock Academy students' fire. Apex immediately befriend her and introduced her to the other students. Misunderstanding Cammi's reference to her as a "Deathlok-ette", Becca chose the codename Death Locket to suit her new identity and new life.[2]

Unbeknownst to everyone, Apex possessed technopathic abilities, and was using Becca's Deathlok cybernetics as a weapon to attack others while Becca slept.[6] Under Apex's control she crippled Juston and destroyed his Sentinel,[6] and nearly killed Reptil with a flamethrower.[7] Apex also used Death Locket to seemingly eliminate Nara.[8]

When Anachronism killed Kid Briton[9] and disrupted Apex's plans, she was extremely rattled and lost control of their shared body to Tim Bashir, her twin brother.[10] After briefly being attacked by Juston, Tim was able to explain to Death Locket and the others about Apex's true powers and nature. Death Locket was among those voting not to kill Tim to stop Apex, and later while Tim was teaching her how to control her powerful cybernetics, the two shared a romantic kiss.[11]

Working together, Death Locket, Tim, and Apex took over the controls of Murderworld.[14] When Apex tried to betray them and kill everyone on Murderworld,[15] Death Locket able to struggle free of Apex's control and attack her allowing Tim to briefly gain control of their body long enough to beg Death Locket to kill him. Reluctantly, she shot him in the head and rejoined the others on the surface. Along with the other survivors, Death Locket agreed to their pact of silence.[16]

Death Locket was again returned to the custody of S.H.I.E.L.D. where she was studied extensively by their science division. Death Locket joined the other Murderworld survivors to discuss the disappearance of Cullen,[17] and agreed to infiltrate Bagalia in search of him. While searching for Cullen, Death Locket met Excavator and the pair flirted. After locating Cullen, she transported the group to Arcade's Massacrer's Casino[18] where the group beat Arcade near to death followed by Hazmat literally killing Arcade.[19] The group was then arrested by S.H.I.E.L.D., quickly freed by Baron Zemo, and given the offered to join his Masters of Evil.[20]

Death Locket accompanied Chase and Constrictor to the Snakepit to meet Excavator and the other Young Masters of Evil. Unaware of the others' plan to act as double agents, Death Locket agreed to accept Zemo's offer and joined the Masters of Evil along with her friends.[21]

On their first mission with the Young Masters, Death Locket became adept at hand-to-hand combat. Still unaware the others were acting as infiltrators when the opportunity to snipe Captain America became available, Excavator urged her to take the shot. Chase intervened saving Cap's life and told Becca about the plan. A brawl between him and Excavator ensued. Chase told her to choose a side. To end the fight, Death Locket shot Chase, apparently killing him, choosing to stay with the Young Master.[1] Chase wasn't dead but was instead saved by Nico, though he was stuck in a coma.[22] Three months later, Hazmat, not knowing that Becca already knew about the plan and told everyone, tried to tell her. The young Masters tried to ambush Hazmat but she defeated them and Becca before proceeding to escape.[23]

Still monitored by S.H.I.E.L.D.,[24] Becca eventually left the Young Masters and relocated to Albuquerque, New Mexico. In New Mexico, Becca used salvaged parts of LMDs to create a makeshift family.[4] She also downed a S.H.I.E.L.D. Helicarrier into Lake Tahoe.[25][26] During her time in isolation, Becca became a big fan of classic Western films. Several of these films were stored on Dum-Dum Dugan's harddrive while other films and novels were downloaded by Becca.[25]

Under the direction of Gaea and Skuld the Norn, Balder the Brave and Spider-Man recruited Death Locket, Hawkeye, Wonder Man, and Druid to a team with the mission to protect Laussa from Sindr, Queen of Cinders during the War of the Realms.[27]

As a Deathlok, Death Locket possesses several superhuman traits due to the synthetic and cybernetic augmentation of her body. Additionally, Harlan Ryker utilized cutting-edge technology that even S.H.I.E.L.D.'s expert describes as "next level".[2] Death Locket has demonstrated powers including:

Like this? Let us know!
Retrieved from "https://marvel.fandom.com/wiki/Rebecca_Ryker_(Earth-616)?oldid=6134372"
Community content is available under CC-BY-SA unless otherwise noted.