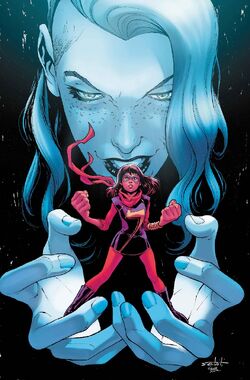 Becky St. Jude became a member of the Carol Cadets to help protect Jersey City using the visions of the Inhuman precog Ulysses Cain and helped recruit volunteers for the team;[1] however, she quickly let the power that came with her position go to her head and began to become overly forceful when apprehending people identified in Ulysses' visions, such as when she used a taser on Josh Richardson when he resisted arrest.

She and the other Cadets also began detaining people indefinitely in their headquarters even though they knew that didn't have the authority to do so. The Carol Cadets' leader, Ms. Marvel, grew sick of the authoritarian methods of the Cadets and told Becky that things were going to change. Becky agreed to release the less threatening prisoners, but refused to release the ones she considered more dangerous, including Josh.

After the prisoners escaped following Bruno's botched attempt to free Josh,[3] Ms. Marvel and Becky got into an argument over the actions of the Carol Cadets. When Becky pointed out that Ms. Marvel was in charge of the team and thus was ultimately responsible for the team's actions, Ms. Marvel agreed and chose to disband the Cadets. Becky refused to allow that to happen and chose to battle Ms. Marvel over the team's fate. She activated a battle suit to help her match Ms. Marvel's powers.

She had the advantage at first, as Ms. Marvel held back so she didn't injure Becky; however, Ms. Marvel eventually won when she shrank down to disable the battle suit's control device, which Becky wore around her wrist. When Captain Marvel arrived to end the conflict, Ms. Marvel tried and failed to convince Captain Marvel to disband the Carol Cadets. Becky snidely said that Ms. Marvel's emotions made her weak.[4]

Now going by the codename Lockdown, Becky continued using Ulysses' visions to fight crime while using her Plasma Armor. Ms. Marvel was determined to bring Becky down and to prove that Ulysses' visions weren't always correct, so she joined forces with the Canadian Ninja Syndicate and their leader, Hijinx, to play a trick on Becky.

When Becky was informed that Ulysses had a vision of Hijinx blowing up Rusty's Repossessions, Becky went to the junkyard to stop him but quickly learned that it was actually all a ruse that Ms. Marvel and Hijinx designed to prove that Ulysses' visions were fallible, and that the bombs Hijink planted were fake; however, this was not entirely true. This led to a final confrontation between Ms. Marvel and Lockdown, and following the subsequent arrival of Captain Marvel and Iron Man, Becky was finally convinced to stand down, and ultimately arrested by the JCPD for impersonating a law enforcement official.[2]

Flight through the use of her Plasma Armor

Like this? Let us know!
Retrieved from "https://marvel.fandom.com/wiki/Rebecca_St._Jude_(Earth-616)?oldid=5377251"
Community content is available under CC-BY-SA unless otherwise noted.