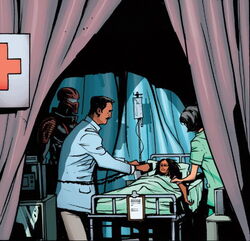 The Red Cross is an international humanitarian movement of volunteer and staff working around the world, taking care of people's.[7]

The Red Cross was active during this conflict, helping both sides.

During the time he was stationed in England, Fury met Pamela Hawley, part of the Red Cross during a German air raid and they fell in love. Hawley was later killed during another German bombing raid in London.[3]

On at least two occasions, in 1944, Red Cross' blood supplies were tainted by nazis agents.

Necrosis, a doctor loyal to the Nazis and infected with the "White gangrene", learned that blood transfusions prolonged his life. He decided to use his illness to aid his country while also find a cure after learning that a rare blood type could cure him: He joined the Red Cross in Australia, where the shipment of blood was sent to the South Pacific battlefields, taking the blood donated by Allies citizens to transfuse himself with and left his own tainted blood in its place, to infect anyone transfused with. He eventually learned his assistant Mary Knowles had the rare blood type who could possibly cure him.

His plans was spotted by the military who sent Captain America and Bucky investigate. Necrosis tried to cure himself and infect Mary, but Cap and Bucky eventually managed to defeat him, and he was killed during the struggle.[1]

A similar action was perpetrated by Herr Schmutz and his minions who began tainting blood donated to the Red Cross by U.S. citizens to be used in war hospitals in Europe, in setting up a secret hideout along the shipping road and planting his agents as truckers. When the shipments were inspected, the supplies of blood were driven to the hideout, and replaced with previously obtained samples poisoned.

When American troops injured during combat in Italy were given the tainted blood as transfusions and died, the military allowed the Human Torch and Toro to investigate state-side to investigate. Discovering the secret operation, the Torch sent Toro to get the FBI while he tried to round-up Schmutz and his men. The nazis were arrested while trying to escape to Germany, using a U-Boat, and were turned over to the authorities.[6]

At the start of 1945, the mob Mock Turlte and his minions steal organized a robbery at a local auditorium where a Red Cross charity function was taking place to raise funds for the organizations efforts assisting those in need during the war. The thefts robbed the charity and fled the scene. Chasing after them, the Whizzer managed to catch up with them and captured the crooks.[4]

At least one of their staff group were attacked by the mad-man Jamie Braddock in the Sahara Desert, in Africa. All members were killed by his henchman, only for a young woman who was later sold as a slave to arabic masters at Tangier in Algeria.[2]

After Magneto crashed a mountain of Genosha on insurgents to his rule, the Red Cross estimated that the casualties were over ten thousand dead.[8]

At the peak of the mutant population (before the M-Day), the Red Cross (governmental agents posing as such, or working with it) proceeded to mutant-screening, under the guise of different health programs, as blood-giving, HIV-testing, according to Fagin, a member of the terrorist Brotherhood. Also, people who refused to proceed those tests or giving, as Michael Asher, were forced to do it by armed agents.

As Michael was revealed to be a mutant, he fled out, chased by both his schoolmates and the governmental agents. Eventually, masked and heavy-armed soldiers with the emblem of the Red Cross assaulted the school in the search for him, and were all killed by him, before the terrorists left, after that government felony made Asher to join them.[5]

Retrieved from "https://marvel.fandom.com/wiki/Red_Cross_(Earth-616)?oldid=5613766"
Community content is available under CC-BY-SA unless otherwise noted.