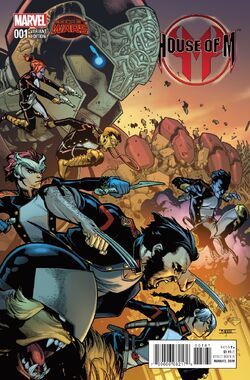 The Red Guard was the elite strike force of S.H.I.E.L.D.. Led by Agent James Howlett/Wolverine, they were formed as part of Magneto's reorganizing government associations after the defeat of the Sentinels.[1][2]

Shaw was seen personally investigating a stolen Sentinel. It was reported by Pulse reporter Kat Farrell despite another agent's attempt to restrain her and her mutant supervisor's reluctance to print it.[3]

A training group was shown under the supervision of Northstar.[4]

Wolverine regained his memory and went AWOL. Other agents used a tracking device to attempt to apprehend him. They were stopped by Luke Cage's resistance group and a number of other heroes, and eventually saw the truth due to Layla Miller.[5]

Like this? Let us know!
Retrieved from "https://marvel.fandom.com/wiki/Red_Guard_(Earth-58163)?oldid=6147273"
Community content is available under CC-BY-SA unless otherwise noted.