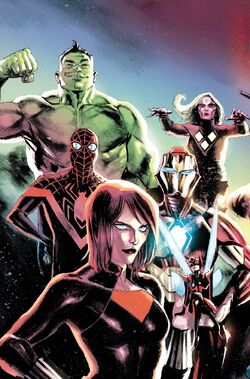 Place of Formation
Somewhere in Colorado

After a twisted fascist version of Captain America allowed Hydra Helicarriers to destroy Las Vegas due to activity from the Underground, Black Widow felt that the only course of action now was to kill Rogers so that acts like what happened in Las Vegas weren't repeated. Widow initially struck out on her own, but she was approached by members of the Champions (Hulk, Spider-Man, and Viv), as well as Falcon, Ironheart, and Wasp, who wanted to help her to ensure the vision of Miles Morales killing Rogers didn't come to pass. Widow eventually agreed to their help.[1]

Widow began training the young heroes in tactics and in espionage through possible scenarios conducted in virtual simulations,[2] and by infiltrating the Hydra Youth Choir.[3] The young heroes increasingly began to question Widow's methods especially when she tortured a Hydra agent to get information out of him. The Champions advocated mercy for the Hydra agent. Widow agreed and started untying him from the chair he was tied to, but Widow was forced to kill him when he suddenly attacked with a concealed knife.[4]

While the teenagers conducted a rescue mission to free Mosaic from Hydra, Widow allowed herself to be captured by Viper so she could blackmail into helping her assassinate Steve Rogers. Viper eventually agreed to help Widow. Widow then received word from the young heroes they found their target: a frail old man barely clinging to life. The heroes expressed doubt that the man was their target, but Widow assured them that he was.[5]

Wasp almost left the team out of indignation over the way Black Widow had been manipulating her and others and compared it to her own experiences in the Red Room. Wasp was ultimately convinced to remain by her teammates. When Black Widow heard over a radio of the destruction of the Mount and that there were no survivors, she mistakenly believed that everyone in the Underground had been killed. She angrily told her trainees that Hydra had killed their friends and that they were going to kill Steve Rogers.[6]

Later, Widow positioned herself in the ruins of the Capitol Building as Rogers headed a ceremony ready to shoot him dead with a sniper rifle while the others were among the crowd to provide intel. Mosaic took possession of Hydra guards to neutralize them. To make sure Spider-Man didn't intervene, Widow locked him in her van, telling him that she didn't want him to become a murderer. Before Widow could kill Rogers, she was attacked by the Punisher. She managed to subdue him, but then she spotted Spider-Man confronting Rogers after escaping from the van. Widow tried to stop Spider-Man's and Rogers' fight and was struck in the neck by Rogers' shield, killing her almost instantly. Spider-Man exploded in rage and brutally beat Rogers. He almost killed Rogers but was talked down by Wasp from doing so. The members of the Red Room were then arrested by Hydra forces while Rogers was carried away.[7]

When a contingent of superheroes launched a desperate attack on Hydra, Hydra allies Taskmaster and Black Ant recognized that Hydra was about fall. The pair chose to switch sides and free the Red Room from their prison cell to be in the heroes' good graces. The Red Room fled to join their fellow heroes in the fight against Hydra, but not before Spider-Man webbed Taskmaster's and Black Ant's faces to a wall.[8]

Hydra was eventually defeated when the true Steve Rogers appeared and defeated the Hydra Steve Rogers. With Hydra defeated, the Red Room disbanded.[9]

Retrieved from "https://marvel.fandom.com/wiki/Red_Room_(Secret_Empire)_(Earth-616)?oldid=5607919"
Community content is available under CC-BY-SA unless otherwise noted.