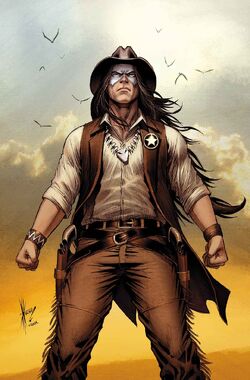 Not much is known about the early life of Red Wolf other than that he was born in the New Mexico Territory to Luyu of the Heévâhetaneo'o Cheyenne.[1]

After the Multiverse was destroyed by the phenomena known as incursions, and its remnants were reshaped into Battleworld, Red Wolf and his people found themselves in the Valley of Doom, a portion of the new planet where the town of Timely and its surroundings had been recreated by the iron will of God Emperor Doom.

They struggled because Governor Roxxon had erected the Roxxon Dam to divert water from the Kirby River to help facilitate the operation of the Roxxon Silver Mines. To ease their suffering, Red Wolf was one of twelve warriors who crossed the Savage Mountain dragging a load of TNT to destroy the damn; however, only he survived the trek and his plan was thwarted by Turk Barrett and numerous other men loyal to Wilson Fisk, the Mayor of nearby Timely, who planned to hang him.

A boy tipped off Ben Urich regarding the imminent lynching and the intrepid reporter notified Sheriff Steven Rogers, who arrived just in time to save Red Wolf's life, taking him into custody, so that he could stand trial before a judge for the crimes for which he was accused. Back at the jail, Red Wolf explained his motives, and Sheriff Rogers told him he would do his best to assure a fair trial, over the objections of Mayor Fisk. Fisk's men then attempted to kill Anthony Stark, in order to silence his drunken singing, forcing Sheriff Rogers to intervene and save his life as well; however, the encounter had been a distraction to lure Rogers out of the jail while Fisk had sent Turk to kill both he and Red Wolf. Red Wolf managed to disarm him, despite being behind bars though, and shot him dead with his own gun, just like the rest of Fisk's men.[2]

Governor Roxxon then sent in Bullseye, Grizzly, Elektra, and Otto Octavius to help intimidate Judge Nelson into leaving town rather than presiding over Red Wolf's trial; meanwhile, Natasha Barnes confronted Sheriff Rogers for protecting Red Wolf, as she believed the Cheyenne killed her husband, Deputy Barnes; however, Rogers assured her that the Native Americans were framed by Fisk's men for that death.

Fisk's new quartet then ambush them in the streets of Timely, forcing Sheriff Rogers to remove Red Wolf's leg shackles so that he could run for his life. As Rogers engaged Bullseye, Red Wolf grappled with Elektra, before Otto intervened, causing Red Wolf to flee, leaving Sheriff Rogers to fend for himself. Rogers incapacitated Bullseye and killed Otto, as Grizzly and Elektra gave chase to Red Wolf.

The Sheriff dragged Bullseye to the street in front of Mayor Fisk's Office, calling upon the people of Timely to take back their town, but the residents cowered in fear, and Rogers was soon distracted by Grizzly and Elektra cornering Red Wolf. He fired a shot that grazed Grizzly, saving Red Wolf's life; however, it cost him his own, as Bullseye drew a hidden firearm and shot Rogers through the heart. Their attention diverted, Widow Barnes then helped Red Wolf hide, while notifying Bullseye that she had seen him run off.[3]

Mayor Fisk tried to send people to attack Red Wolf and Tony Stark only for them to be subdued by the pair. Red Wolf then fought Mayor Fisk, but was defeated, though Red Wolf managed to get free from Mayor Fisk's grasp and stab him in the eye with Sheriff Rogers' badge, then point a gun at him. Although Red Wolf hoped to have Mayor Fisk convicted and executed, his plans didn't happen due to the fact that Widow Barnes killed the Mayor instead. Following Fisk's death, Carol Danvers was sworn in as the new Mayor of Timely, with Red Wolf becoming the new sheriff.[5]

After the Multiverse was restored, Red Wolf and the residents of Timely were returned to their own time where he began investigating the death of the Michaels and was attacked by their murderer, a time-traveler called the Surveyor, who was interested in the Roxxon Silver Mines. As the two battled, Red Wolf struck the Surveyor's time-travel technology with his knife, creating a temporal disturbance which teleported them to Santa Rosa more than a century into the future.[6]

Standing Up For Justice

Red Wolf later encountered Hawkeye where he allied with him against the company Oasis Spring Water who had secretly been harvesting the underground water reservoir that was on the Sweet Medicine Indian Reservation. They were ambushed by the militia employed by Oasis Spring Water and swiftly defeated by Hydro-Man.[7]

After Steve Rogers revealed himself to be a Hydra sleeper agent and overthrew the United States of America to establish a Hydra Empire, Red Wolf joined the Underground.[9]

Master Combatant: Red Wolf has exceptional skills in both armed combat, where he has mastered the use of knives, axes, staves, and firearms, as well as hand-to-hand combat,[10] and has proven himself to be a capable and experienced fighter, even when outmatched or outnumbered.[8]

Expert Hunter and Tracker: Red Wolf has vast hunting and survivalist experience, employing many different methods as a result of extensive animal observation. He also possesses astonishing tracking abilities and can pick up a prey's trail from even the smallest of details in the terrain.[11]

Zoopathy: Through careful observation and understanding Luyu taught Red Wolf to develop a limited form of zoopathy or ability to communicate with and influence wolves, though it is unclear if this might also extend to other animals.[12]

Like this? Let us know!
Retrieved from "https://marvel.fandom.com/wiki/Red_Wolf_(Earth-51920)?oldid=5747502"
Community content is available under CC-BY-SA unless otherwise noted.