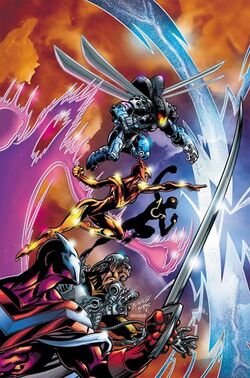 The Reedemers were first formed to ferret out a conspiracy within the Commission on Superhuman Activities in a joint operation between Valerie Cooper and the V-Battalion. They were created as a mirror of the original Thunderbolts:

The Redeemers managed to learn that the conspiracy involved a mind-controlled Henry Peter Gyrich. When the Redeemers confronted Gyrich, he used nanites to control them and make them fight the Thunderbolts team. After the Thunderbolts were disbanded and most members pardoned, Jolt and Charcoal were added to the Redeemer program. The team trained, briefly, with Captain America.[1]

Graviton returned to Earth, looking to fight the Thunderbolts. Finding the Redeemers at Mt. Charteris instead, he attacked and massacred the entire team. Scream vanished in a vacuum and Charcoal was ripped apart and spread across the desert as dust. The gravitational forces keeping Jolt's bioelectric form together were removed, dispersing her body, while Meteorite was left floating in the upper atmosphere to suffocate. The Beetle's armor was crushed into a tiny box and Smuggler was apparently hurled into the Sun. Citizen V and Fixer survived the assault, but the Redeemers were no more. Years later it was discovered that Smuggler had survived by teleporting into the darkforce dimension. Baron Zemo used Conrad's life as a bargaining chip to ensure Atlas would help him defeat Genis.[citation needed]

Like this? Let us know!
Retrieved from "https://marvel.fandom.com/wiki/Redeemers_(Earth-616)?oldid=6006287"
Community content is available under CC-BY-SA unless otherwise noted.