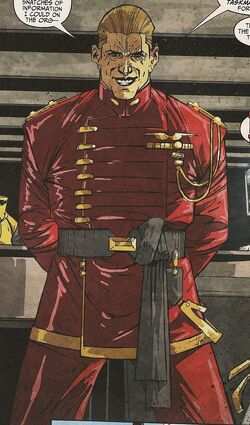 Confronting Taskmaster in Bolivia, Redshirt and his army attacked. While Taskmaster made short work of Redshirt's men, Redshirt's extraterrestrial combat techniques gave him an edge until, upon threatening Taskmaster's former wife Mercedes Merced, Taskmaster used his abilities to copy Redshirt's moves (and, in the process, losing the memory of his wife) and kill him.[2]

Redshirt received drug treatment A.I.M. to strengthen and lighten his skeleton to match Shi'ar physiognomy. He also underwent Gnostic torture in order to unlock an unused portion of his brain that lets him counter his opponents in unexpected ways.

Like this? Let us know!
Retrieved from "https://marvel.fandom.com/wiki/Redshirt_(Earth-616)?oldid=6494813"
Community content is available under CC-BY-SA unless otherwise noted.