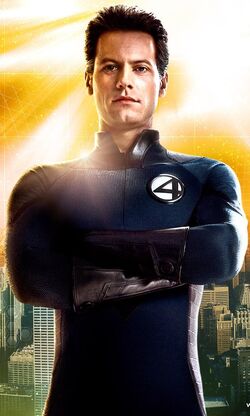 No, you're right. I didn't. I stayed in and studied like a good little nerd. And fifteen years later, I'm one of the greatest minds of the 21st century; I'm engaged to the hottest girl on the planet; and the big jock who played quarterback in high school? He's standing in front of me asking for my help. And I say he's not gonna get a damn thing, unless he does exactly what I tell him, and starts treating me and my friends with a little respect.

Reed Richards, also known as Mr. Fantastic, is a member of the Fantastic Four. Brilliant mathematician and physicist, Reed Richards is a humble genius and gifted idealist.

Reed always reached for the stars and would have done anything to fund his lifelong dream of an experimental space mission — including cutting a last-ditch, no-win deal with Victor von Doom. But one tiny miscalculation turned into tragedy when a brutal cosmic storm battered the spaceship and its crew. The cosmic rays left Reed the ability to bend, stretch and expand his body in any imaginable way. Reed himself responsible for the accident which transformed the Four, and he wrapped himself around his work to reverse their condition.

The exposure to the cosmic cloud brought out the worst in Victor Von Doom. He turned Ben Grimm against Reed, convincing him that Reed was responsible for Ben's hideous appearance. Slowly Ben realized that Victor was out to ruin Reed and united with his friends to stop him. Reed Richards, Sue Storm, Johnny Storm, and Ben Grimm now the Fantastic Four battled against their new, electrified enemy, Dr. Victor Von Doom.[1]

Accustomed to being pulled in different directions, Mr. Fantastic worked to realize his potential as boyfriend to Sue, scientist to humanity, and leader to the Four. As the Silver Surfer raced around the globe wreaking havoc, the Fantastic Four unraveled the mystery of the Silver Surfer and confronted the surprising return of their mortal enemy, Dr. Doom.[2]

Like this? Let us know!
Retrieved from "https://marvel.fandom.com/wiki/Reed_Richards_(Earth-121698)?oldid=6087145"
Community content is available under CC-BY-SA unless otherwise noted.