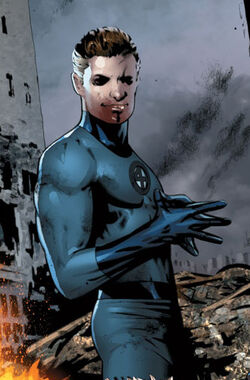 They said it all started with a flash in the sky and a ripple through the clouds. Nobody knows what caused this exactly, but some people think it might be a punch. Was he really that strong? Had the infection made him so determined to get here in search of a brand new food supply? At the time I said no... but having experienced this hunger firsthand I'm afraid that I now know better. The Avengers were the first on the scene. Can you picture them? Faces grave, concerned for all those human casualties. That idiot Colonel America reassuring everyone that everything would be fine now that the super heroes have arrived. What they didn't know is that the infection had targeted the super heroes of this dimension and a thousand realities before us. This was how it consumed, you see... by infecting super heroes just like him and sending them out to infect the others. Within twenty-four hours, we'd consumed the entire planet. One super hero from an infected universe... That was all it took to end an entire world.

Little is detailed about Reed’s life before the zombie plague arrived on Earth-2149, however it can be presumed that it followed much the same path as Reed Richards of Earth-616.

Reed, and the rest of the Fantastic Four, had been out, presumably doing what they could for the city, believing Franklin and Valeria had been secure in a code-locked area of the Baxter Building. Unfortunately, on their return they find She-Hulk, who also had the access codes, has been zombified and killed Sue's and Reed's children, leaving Mister Fantastic mentally scared. Furious, Sue blows She-Hulk’s head up with a force field. Just then, they receive a call from Nick Fury, informing them of the gathering resistance movement aboard the S.H.I.E.L.D. Helicarrier.

On their way to the Helicarrier in the Fantasticar, they run into Nova and Thor, and together they head to join the resistance. Once there, Fury calls them all together and explains that it seems to be the end of the world, and though they may have had differences in the past, they are all on the same side now.

While a team is dispatched back to the surface, the Fantastic Four and a few of the boffins stay behind to try and work out how exactly to stop this thing. Reed is working in a lab on some zombified remains, he finds the whole thing fascinating, and marvels at the efficiency of the creatures, Sue is enraged that he could be so analytical about the things that killed their offspring.

Later, Sue, Johnny, and the Thing, approach Reed once more. However, Reed is still extolling the virtues of zombification, and explains that as they entered he pricked their skins and infected them without their knowledge. The three turn, fall upon, and infect a laughing Reed, who’s mind has obviously broken from what he has seen, and the deaths of his kids.

Nick Fury escapes, and puts the Helicarrier in lock-down, a thick bulk-head separating the Fantastic Four from the transporter and Fury. Thing breaks his way through the bulk-head, and inside the air-lock they see Fury, Dr Strange, Storm, Nightcrawler, and Thor, who is smashing the transporter with Mjolnir. But with nowhere to run, the Fantastic Four infect the whole group. Reed then tells the others to collect the pieces of the transporter, and start moving it to the Baxter Building.[1]

It must be around this point, that he and Beast head to the Xavier Institute, and reprogram Cerebro to search for uninfected humans.

Finding a sizeable stash of meat in Latveria and the surrounding area, they and a huge horde of their zombified peers head off to lay siege to Castle Doomstadt. A few of them manage to get through the magical force-field protecting the castle, and confront Dr Doom, Scarlet Witch, and Ashley J. Williams. Scarlet Witch is bitten by the zombified Punisher, and the other two make their getaways.[2]

Presumably, Reed gets held up by the risen Deadite Legion, and at some point returns to New York to continue his work with the commandeered teleporter.

Once he has it working, he finds another reality which is in conjunction, making suruptitious holographic contact with the Reed of that reality. He projects himself as he was before he was infected, and discovering this alternate Reed is a lot younger, also projects a healthy holographic version of Franklin. He helps the young Reed to build a similar teleporter in his world, and invites him to visit.

Completely fooled, the young Reed exits the teleporter into a dilapidated and abandoned Baxter Building, and when he stumbles out into the post-apocalyptic street, zombified Reed and the other Fantastic Four appear to ‘greet’ him.

Reed tells the younger version of himself, of how the plague began on this world, with purple lightening, and something falling from the sky, and that within 24 hours the planet was consumed. He says that now they have run out of food, and they try to grab the young man, but he manages to get away and flee down the sewers. The Fantastic Four went back to the Baxter Building. They arrived just as Sue, Ben, and Johnny, turn up to find out what has happened to Reed. As the zombified FF attack, Sue protects the remaining three of the four, with a forcefield, and they manage to lock their zombified counterparts up.

Showing his superiority, and experience, zombie Reed manages to squeeze through the airtight door, and grabs Ultimate Ben, but the young Sue pops a force bubble in his brain and stops him in his tracks.

The Fantastic Four were held in a nuclear containment area, designed for the Hulk, and he tells the young Mr Fantastic how impressed he is with the design, but that because he will never kill the zombified FF, it is merely temporary accommodation.[3]

Later, Human Torch comes to visit Reed in containment, and asks for a fast-brewing beer recipe, which Reed gladly gives out. Johnny is momentarily suspicious, but Reed explains that he knows how they are going to get out, but they are waiting for the right moment. Apparently, twice a day, live animals are squeezed into the containment to feed them. A little later still, he tells Ultimate Sue and Reed that the break-out is exactly one week.

When Human Torch becomes a host for an N-Zone parasite, with nearly all options exhausted, Ultimate Reed and Thing ask the zombie Reed to help. So when he appears to be more interested in Sudoku, young Reed orders all distractions confiscated. Reed explains that he isn’t too bothered as they are breaking out in a few hours anyway.

A few hours later, with the Ultimate Fantastic Four seeking help from Victor van Damme, the zombified FF put their plan in motion. They convince the guards outside that they have created a teleportation device from a pen, the chemicals from ink, and using a hair as a keyboard.

Confusingly finding Dr. Doom coming to save the day, the zombie FF attack. Doom extinguishes Human Torch; snaps off Things arm; and, using magic, necrotises Sue’s body even further. Then Reed steps up and tries to envelope Dr. Doom, but he conjours up maggots that begin to eat through his dead flesh.

Finally, the zombified Fantastic Four are dumped through the operational teleport back into the street of their own dimension.[4]

Seemingly those of Reed Richards of Earth-616.

Like this? Let us know!
Retrieved from "https://marvel.fandom.com/wiki/Reed_Richards_(Earth-2149)?oldid=6076590"
Community content is available under CC-BY-SA unless otherwise noted.