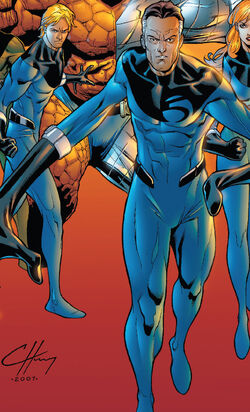 Reed Richards, his best friend Ben Grimm, girlfriend Susan Storm and Susan's brother were all aboard a test flight for Richards' new experimental rocket. Cosmic radiation mutated each member of the group into a super-human. The four used their powers to become the team known as the Fantastic Four.

Reed and Susan eventually married and had a son, Franklin. The Fantastic Four continued to explore the universe and battle evil, evloving into the Fantastic Five. While working in the Negative Zone, disaster struck. Reed was severely injured. Susan was placed in a coma using her powers to hold back a breach between the Negative Zone and Earth.

The Fantastic Four built the Fantasti-station in the Negative Zone where Reed worked to repair the rift in space/time. He built a robot, Big Brain, with his intelligence and wife's ability to project force fields as a replacement member.

Once Reed completed repairs to the rift, he was able to bring Susan out of her coma and found a cure for himself as well. Reed and Susan have both returned to Earth and have re-joined the Fantastic Five.

Richards is a super-genius with degrees in several fields.

Like this? Let us know!
Retrieved from "https://marvel.fandom.com/wiki/Reed_Richards_(Earth-982)?oldid=5241680"
Community content is available under CC-BY-SA unless otherwise noted.