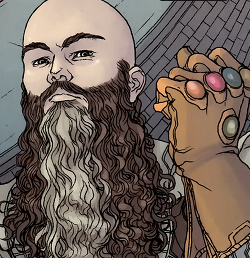 Born into a universe where Nazi Germany succeeded in conquering the world during World War II, the brilliant yet cold Reed Richards grew up without a father, who vanished under mysterious circumstances in his youth.[1] Raised by his mother alone without a positive male influence, he developed a wanderlust and eventually became a scientist working for Hitler's new space program.[2]

Unable to solve the conundrum of how to shield his rocket from radiation, Richards enlisted the aid of several other scientists, with one, Viktor von Doom, able to find a solution. Richards promptly removed Doom's brain and attached a portion of it to his own through surgery, and discovered an entirely new purpose for the space flight. By altering the shielding to focus the cosmic rays rather than deflect them, he exposed himself, pilot Benjamin Grimm, and fellow passengers Jonathon and Susan Sturm to the radiation, thus gaining superpowers.[2]

Realizing that Hitler was unfit to lead humanity towards his vision of the future, Richards had the now monstrous Grimm kill the dictator along with the Sturm siblings during a public ceremony. As the new leader of the Nazi party, Richards somehow used his vast resources and intellect to obtain his universe's Infinity Gauntlet, which he dubbed the "God Hand". Before he could use it to remake the world, however, he was attacked by the superheroes of the world as form of revolt, and in a moment of desperation, accidentally destroyed the Earth, the solar system, and the Milky Way galaxy; with the gauntlet.[2]

The Council of Reeds

Left floating in space after the destruction of his world, Richards eventually had the idea to create a bridge to another universe, discovering a pocket dimension where he met two alternate versions of himself who possessed Infinity Gauntlets of their own. Together, they founded the Interdimensional Council of Reeds.[2]

He would later attempt to convince Reed Richards of Earth-616 to join the Council by launching a surgical strike against the Doctor Doom of Earth-45, which ended in the villain being placed within the Hole, a space underneath the Council hall. Richards revealed that because his DNA had been spliced with that of his universe's own Victor von Doom, he understood that Doctor Doom - any Doctor Doom - will never stop of their own accord if faced with even the slightest other option, and must be detained. Richards-616 would later decline the offer to join their collective.

Richards would continue to help lead the Council until the mad Celestials of Earth-4280 arrived to usurp control of their base's cross-dimensional gateway in an attempt to conquer the multiverse. Despite wielding the power of the Infinity Gauntlet, he was among the first to die in the attack.[3]

Like this? Let us know!
Retrieved from "https://marvel.fandom.com/wiki/Reed_Richards_(Earth-98570)?oldid=6118825"
Community content is available under CC-BY-SA unless otherwise noted.