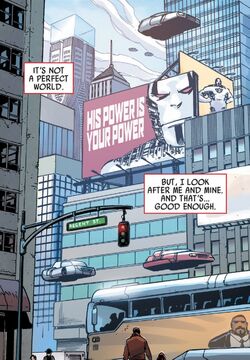 The Age of Heroes -- of powers -- is at an end! Soon there shall be one power over all! For this is the Age of Regent!

The Regency was one of domains of Battleworld. It was fashioned by God Emperor Doom from the remnants of Earth-18119 and its Baron was Augustus Roman, formerly known as Regent.

At some point in the past, numerous vigilantes and super heroes started disappearing. The time the Avengers had an emergency assembly to discuss the situation, when a breakout occurred at Ryker's, leading to the escape of numerous super villains. When the Avengers and other remaining heroes identified the cause of the disappearance as Augustus Roman, the C.E.O. of Empire Unlimited, a company researching super-abilities and bio-technologies, they flew to Empire Unlimited Headquarters. Spider-Man was about to join them, but he realized one of the potential escapees was Venom, who would be coming after his family.

Spider-Man swung to his apartment, where he found his family in Venom's grasp. When he engaged the symbiotic villain in battle, Mary Jane took their baby Annie out of the building, and decided to follow a firetruck to a building set aflame, where she could be safe from Venom due to the symbiote's weakness against fire. Venom soon followed Mary Jane to the building, but Spider-Man arrived just in time and forced the villain into the blazing building. Upon being notified the building had been evacuated, Spider-Man realized what he had to do to prevent Venom from coming back to endanger his family ever again. Spider-Man collapsed the structure, seemingly causing Venom to be crushed and burned to death.

Meanwhile, the Avengers had unsuccessfully confronted Augustus Roman, who had named himself the Regent. Roman had acquired the means to mimic the abilities of superheroes by harvesting genetic materials from their corpses after killing them. Regent killed the Avengers and the other heroes, leaving only Spider-Man who wasn't present at the final battle. With the Regent having taken control over the domain by force, Peter decided to retire the mantle of Spider-Man to focus on protecting his family.[1]

To prevent their powers from being scanned, Peter and Annie used inhibitor bracelets. The night before starting school, Annie's inhibitor broke down, and the next day she had to keep her powers down in hopes they wouldn't be noticed. After taking photos of D-Man, who was protesting against the Regent's regime, being taken down by Boomerang, Shocker, and Rhino, Peter headed to the Daily Bugle, where he overheard that the Regent's forces had found super-powered people in the same school, Public School 122 Mamie Fay. Using his hood as his only disguise, Peter jumped through the city and got to the school, where he found the Power Pack fending off the Regent's goons. Spider-Man distracted the villains and forced the kids to escape, while Mary Jane retrieved Annie. Back on the Regent's headquarters, he decided to unleash the Sinister Six to hunt down Spider-Man, now that he had been spotted.[2]

Spider-Man tried to buy power inhibitors from the Tinkerer, but the latter alerted the Sinister Six, of which Doctor Octopus came to get Spider-Man. Spider-Man violently subdued Otto before the Sinister Six arrived to the scene, and were left only with the information that he had taken inhibitor chips. Kraven deduced he was trying to protect somebody by using the chips, for which he most likely had a family, specifically a child. Peter returned to his home and reconfigured the inhibitor chips for Annie, when the Regent made a television broadcast announcing a compulsory screening in Annie's school. When Peter, MJ, and Annie arrived to the building the following day, they were able to pass the scans. However, another kid was discovered having powers, forcing Peter to jump into action as Spider-Man to defend him. While he faced the rest of the Sinister Six, Mockingbird and Prowler, who were disguised as Regent's agents, discovered Annie was the other powered kid, and abducted her and her mother.[3]

Spider-Man finished dealing with the Sinister Six when Sandman, also working for S.H.I.E.L.D., tried to convince Parker to follow him. Peter doubted Sandman's word, which allowed enough time for the Regent to personally appear and subdue both of them. Meanwhile, Annie and MJ were introduced to S.H.I.E.L.D. and its leader, Hawkeye. While Spider-Man and Marko were brought to the Regent's base, Dr. Johnny Ohnn worked at the resistance's base to reverse engineer Annie's inhibitor bracelet, and he created an arrow-head which could neutralize the Regent's powers, but only needed a DNA sample from him. The resistance's base was invaded by the Sinister Six after the Regent read Sandman's mind to learn of its location, while S.H.I.E.L.D. used one of Ohnn's portals to escape, Annie jumped into action, helping to hold back the villains. Another portal was opened, which had been sewn into Sandman. Marko activated it to let S.H.I.E.L.D. get into the Regent's stronghold. Hawkeye, Mockingbird, and Prowler entered it, and they were soon followed by MJ and Annie.[4]

While S.H.I.E.L.D. tried and failed to neutralize the Regent, Annie and MJ confronted the Regent's scientists. Using an armor similar to the Regent taken from one of the scientists, MJ helped Annie destabilize the mechanisms in the containers that held the heroes killed by the Regent that allowed him access to their powers. This course of action drew the Regent's attention, who confronted Annie and MJ. Hearing his family in danger allowed Peter to escape imprisonment and attack the Regent, taking the action from his headquarters to the street. Annie decided to help his father, and she struck the villain with an arrow-head obtained from Hawkeye; however, even with his powers neutralized, the Regent was still a threat. Peter, Annie, and MJ teamed up to beat him up, but the Regent got hold of Annie. Peter bluffed his way next to the Regent, and made a joke that caused the villain to laugh and be distracted for long enough so Peter could strike a finishing blow that knocked him out. S.H.I.E.L.D. proceeded to take the Regent into custody using an improvised restraining unit created by the Prowler. With the Regent neutralized, Peter, MJ, and Annie resumed their normal lives.[5]

Like this? Let us know!
Retrieved from "https://marvel.fandom.com/wiki/Regency?oldid=6054159"
Community content is available under CC-BY-SA unless otherwise noted.