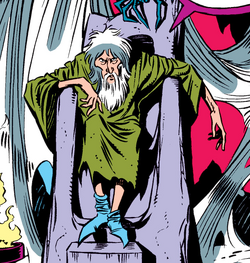 
Dalvate (son-in-law)
Affiliation
Served by giant spiders; servant of the Black Gods of R'lyeh, the Old Ones, the Goat with a Thousand Young, and the children of Great Cthulhu
Base of Operations
Castle on the banks of the Shikri; formerly unnamed village on the banks of the Shikri
Status
Living Status
Alive
Identity
No Dual
Occupation
Sorcerer, self-styled king
Characteristics
Gender
Male
Hair
Grey
Origin
Origin
Human
Reality
Earth-616
Creators and Appearances
Creators
Bruce Jones, John Buscema
First Appearance
Conan the Barbarian #141
(December, 1982)

Reimos lived in a village on the banks of the Shikri. He was the father of Theta,[1] Rhula, Lohla, and Bethene.[2]

Going from the trade routes of the Western Sea into the lands at the mouth of the Shikri, the pirate captain Dalvate spotted Theta and her sisters. He followed them home and seized them, bringing Reimos in the melee. Reimos shouted a dark curse in a language unknown to the pirates, and cut off Dalvate's hand with an axe.

Reimos was brought aboard Dalvate's ship and was tortured for seven days and seven nights. Reimos kept uttering his curse. He was eventually thrown overboard, almost lifeless. Dalvate believed to have killed Reimos, though he survived. He married Theta but soon tired, and intended to sell or kill her, while selling the other sisters at the slave port of Vargas. Dalvate's first mate Fhrank intended to avenge Reimos and escape with Theta, having fallen in love with her.

During that time, Reimos recovered physically, but became mad. He served the Black Gods of R'lyeh, the Old Ones, the Goat with a Thousand Young, and the children of Great Cthulhu, and seemingly interacted with some of them. In exchange, they gave him a web-enveloped castle inhabited by giant spiders, in which he secluded himself on his "throne of silk", self-styling himself as Sorcerer Reimos and King Reimos.

Later, Dalvate saw in giant spiders Reimos' "hell-spawn", and lost himself in Reimos' domain, where he was killed by the spiders. Conan, Theta, and Fhrank wandered into Reimos' castle. There's they discovered Reimos and his madness. Rejected by his daughter, Reimos unleashed his spider servants on the three. Conan lit the castle on fire, and they escaped, but were pursued by the spiders, inhabiting Dalvate's and his men's bodies. Fhrank was killed by the spiders during the escape.[1] Reimos seemingly died in the fire.

Through his dealings with the Black Gods of R'lyeh, the Old Ones, the Goat with a Thousand Young, and the children of Great Cthulhu, Reimos seemingly acquired powers over giant spiders, who could go to the extend of inhabiting dead bodies.[1]

Like this? Let us know!
Retrieved from "https://marvel.fandom.com/wiki/Reimos_(Earth-616)?oldid=6038290"
Community content is available under CC-BY-SA unless otherwise noted.