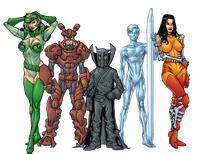 Base of Operations
Avengers Mansion on Counter-Earth
Affiliations

Following the departure of the costume heroes native to Earth-616 from Counter-Earth, the only remaining member of the Avengers would be the Swordsman. Swordsman, learning he had cancer, would decide that Counter-Earth would still need to be protected by heroes and would seek to gather a new group of super-powered individuals to lead and train as a new team.

He would gather a team that would eventually be regarded as the Remnants. They would include Henry Pym's former janitor Ernest Sanger who would begin wearing Pym's abandoned Ant-Man armor and calling himself Mant; The Super-Adaptoid who gained sentience in a New Jersey shopping mall and taken on a vein female persona as Amazo-Maxi-Woman; T'Dogo a valet for the Wakandan embassy who has taken on the mantle of the now outlawed Black Panther; Sterling a Las Vegas party many who has been endowed with the remnants of the Power Cosmic following the death of the Silver Surfer; and lastly Miss Thing a feral fighter who killed Counter-Earth's version of Wolverine and wears his bones and claws. Swordsman would lead them, taking on the identity of Deadpool, however he would soon leave the team due to his cancer treatments.

Deadpool would go mad, learning the secrets of Counter-Earth and realizing that they are merely the fabrication of a small boy became determined to destroy the Counter-Earth pocket dimension. He would steal a SHIELD helicarrier loaded with nuclear weapons.

The Remnants would be hired by SHIELD General Darlegung to prevent Deadpool's insane plan. Using the abandoned Fantasticar, the Remnants would fly to the stolen helicarrier and clash with Deadpool. Deadpool would reveal the nature of their existence to them, and before they could stop him, Deadpool would launch all the nuclear weapons at the Watcher's citadel on the moon, riding one of them along the way. This would cause a tear in the fabric of reality, leaving the Remnants to wonder how to clean up the mess.

Retrieved from "https://marvel.fandom.com/wiki/Remnants_(Heroes_Reborn)_(Earth-616)?oldid=5657880"
Community content is available under CC-BY-SA unless otherwise noted.