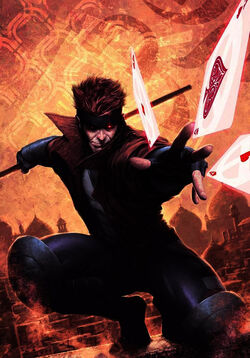 It is revealed that Gambit is the "third Summers brother". Sinister used genetic material from Scott Summers and combined it with his own to create the perfect weapon against Apocalypse.

Seemingly those of Remy LeBeau (Earth-616)#Powers.

Like this? Let us know!
Retrieved from "https://marvel.fandom.com/wiki/Remy_LeBeau_(Earth-41001)?oldid=5553373"
Community content is available under CC-BY-SA unless otherwise noted.