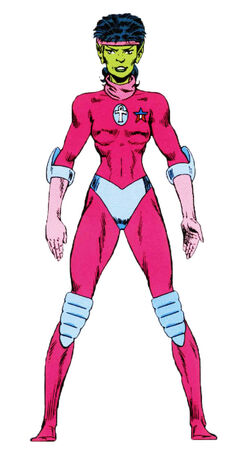 Replica lived on Haven, which was ruled by a band of mutants led by the murderous descendant of Wolverine, Rancor. Her parents immigrated to Haven when she was a child, and made her promise never to reveal her true Skrull nature, for Skrulls were hated throughout the galaxies. Replica was also quite religious, a follower of the Universal Church of Truth.[2]

She stows away in the Guardians ship as an insect, only to be discovered by Yondu. Nikki was suspicious of her from the start, believed later to be due to Nikki's hatred of reptilians, although Replica kept the secret she was a Skrull until faced with the Kree member of Force, Eighty-five. In order to save the lives of the Guardians, Replica gave herself as a playmate to her god, Protégé, the child-like ruler of the Universal Church of Truth. Nikki later expresses concern over Replica.[3]

Replica came into conflict with Protégé's other companion, Malevolence, the daughter of Mephisto. Replica receives a call for aid from her old friend Martinex, as a planet was being torn asunder by multiple tragedies. She dodges the attentions of Protégé and Malevolence to answer this call, though ultimately Protégé lets her go. Despite this, she still must be rescued from a Universal Church ship by Firelord. Despite not being trusted by him, they team up to rescue many innocent people in danger on Martinex' planet. The two ultimately team up with many other powerful beings, including Hollywood in order to form the Galactic Guardians.[4]

She was skilled into using her powers in combat.[1]

She was also an experienced spy and a skilled actress.[1]

Replica often altered her furrowed chin in order to appear more humanoid to others.[1]

Like this? Let us know!
Retrieved from "https://marvel.fandom.com/wiki/Replica_(Earth-691)?oldid=5356246"
Community content is available under CC-BY-SA unless otherwise noted.