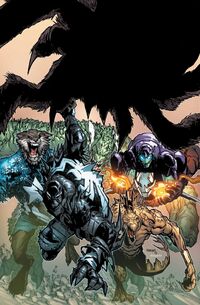 Origin
A resistance movement formed to end the tyrannical rule of the Spider-Queen.

For Tony. For all of them... we're going to take Spider-Island back.

The domain of Spider-Island was taken over by the Spider Queen after infecting almost every citizen with a spider-virus before a cure could be developed including the Avengers. A few citizens that escaped the Spider-Queen's control formed an underground resistance to end the Spider-Queen's rule.

A glimmer of hope arose when it was discovered that Werewolf by Night broke free from the Spider-Queen's control by becoming a werewolf. So, Agent Venom of the Resistance, who avoided being controlled by merging with the Venom symbiote, gathered various drugs and mystical artifacts that altered DNA and break the Spider-Queen's control over people. The Resistance lured the brainwashed Avengers into a trap and transformed three of them into different creatures to break Spider-Queen's hold over them.[1]

After the Resistance returned to their underground base, Iron Goblin and Stegron started to build a retro-regression ray. It was decided by the Resistance to transform some of their loved ones in order to free them of the Queen's control. Though it was what the Queen wanted them to do, they decided to do it so they didn't lose their human sides. The Resistance were successful in rescuing Mary Jane Watson, Sharon Carter, Betty Brant, and Carlie Cooper by transforming them into Lizard creatures using the Lizard's Lizard Formula. However, the Spider-Queen had placed tracking devices into the women, which allowed a spider-army to locate and attack the Resistance's base. The Resistance was able to escape thanks to Iron Goblin's sacrifice.[3]

The Resistance fled to the ruins of the Avengers Mansion and made that their new base. Using Stegron's Retro-Regression Ray on dinosaur fossils found in the Museum of National History, the dinosaurs were brought back to life and used as diversions for Spider-Queen's forces. This allowed the Resistance to launch an attack on Stark Tower, which the Queen had converted into her castle. Agent Venom and Captain America were to able to capture the Queen, but the Resistance became divided over whether they should kill her or let her live. The Queen took this opportunity to transform into a giant spider.[4]

The Spider-Queen quickly overpowered the Resistance. Agent Venom then came up with a plan. He convinced his Venom symbiote to leave him and merge with the Spider-Queen. The symbiote then forced the Queen to jump out of a window high above Manhattan. The Queen killed the symbiote by blasting it with sonic attacks, but it was too late to halt her descent, and she crashed onto the street below. Too injured too move, Stegron ordered his dinosaurs to finish her off by eating her. Sadly, Venom was grievously hurt and died of his injuries. He spent his final moments surrounded by his allies and died shortly after Peter reciprocated Flash's claims that he was a hero.[5]

Retrieved from "https://marvel.fandom.com/wiki/Resistance_(Earth-19919)?oldid=5677130"
Community content is available under CC-BY-SA unless otherwise noted.